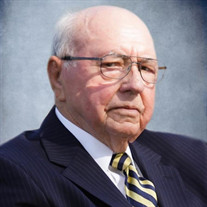 William Carlos Parler Sr., age 92, of Frankford, DE passed away at home surrounded by family on Friday, May 6, 2022. He was born on August 12, 1929, in Creston, Calhoun County, SC, son of the late Marion C. and Anna J. (Keller) Parler. Bill was proud of his family, and they were the focus of his life and career. He graduated from the Cameron, South Carolina High School. Bill attended the University of South Carolina on a NROTC scholarship. After a year there, he received a competitive congressional appointment to the US Navy Academy from which he received a BS degree in the class of 1951 and a commission as a line officer in the US Navy. Bill trained on USS Missouri. He subsequently served on destroyers and amphibious ships throughout the world, including operations in the Mediterranean, Korea, Vietnam, and the Formosa Straits. It was during his naval service that he met and married Beatrice Anne Hemenway, on August 13, 1955. Bill resigned his regular navy commission to attend the University of South Carolina School of Law from which he earned a Bachelor of Law degree with high honors and was elected to the Phi Beta Kappa honorary society. He was admitted to the South Carolina Bar. Bill then attended Harvard Law School on scholarship and earned a Master of Laws degree. Thereafter, Bill began an uninterrupted career of public service as an attorney with the federal government in then newly emerging field for the development and use of atomic energy for civilians and natural defense purposes. With the legal office of the Atomic Energy Commission, he specialized in government contract matters, administrative law, the legislative process and energy, and environmental law. During his career as an attorney, Bill served, among others, as the committee counsel to then United States Congressional Joint Committee on Atomic Energy, as an administrative appeal judge and as the General Counsel to the United States Nuclear Regulatory Commission, appointed by George H. W. Bush. He received that agency's distinguished service medal and the Presidential distinguished Executive and Meritorious service awards. Bill remained an active member of the South Carolina Bar until retirement on January 1, 2006. After resigning his regular navy commission and during his civilian public service, Bill was also an active participant in the US Naval Reserve for many years. He retired as a Captain in1971, but thereafter remained in the standby reserve for the maximum period. Upon retirement from his civilian position, he and Anne moved from their home in Rockville, Maryland, to a farm near Ocean View, Delaware, where they enjoyed life and their family. Bill attended with Anne St Martha’s Episcopal Church in Bethany Beach, Delaware. He was baptized and confirmed as a youth in the Shady Grove Methodist Church in the Creston, South Carolina community. During his retirement years, Bill was fortunate to become informed about, and to document some of his earliest direct line of ancestors who sought a better life in Colonial America. William Parler, the earliest identified, fought with General Francis Marion and General Thomas Sumter for independence in the American Revolution. So did William's son, John and William's two surviving brothers; one of those brothers died in the enemy's prison war camp. William's other son fought with the Georgia militia in the War of 1812. Descendants of William Parler's family served in all wars from the American Revolution to the current conflicts. Finally, during those years, Bill reflected more with great admiration and respect on those in his family and neighbors who served and sacrificed for America. In addition to his parents, he was predeceased by his sister, Harriet Spigner and husband Laney Spigner; and his grandson, Bradley J. Parler.Bill is survived by his wife of 66 years, Beatrice Anne Hemenway Parler; his sons: William C, Parler, Jr., of Timonium, MD; Blair H. Parler (Rebecca) of Mount Airy, MD; his daughters: Bethanie R. Detar of Ft. Mill, SC; Beatrice C. Nutt (Jeffrey) of Hingham, MA; his grandchildren: Jacqueline H. Parler, William C. Parler lll, Madaline A. Parler, Kathryn F. Parler, Nicole M. Hawkins ( Christopher), Kasey B. Forsell( Lt. Kory M. Forsell) ,Taylor B. Parler, Katherine A. Detar, Kyle W. Detar, Christopher V. Detar, William EH Nutt, and Robert JD Nutt; and his great grandchildren: Jacelyn G. Smith - Hawkins, and Eowyn R. Forsell. Please sign the virtual guestbook located on the tribute page.

The family of William Carlos Parler Sr. created this Life Tributes page to make it easy to share your memories.

Send flowers to the Parler family.