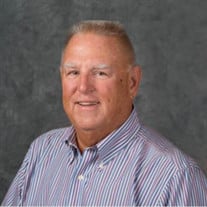 William L. Mowll III, 78, passed away on Thursday, August 5, 2021, peacefully at home following a short illness. Known to his family and friends as “Skip,” he was somewhat of a “Renaissance man” with success in athletics, music, art, and engineering. Skip lived with his wife Patricia (Pat) in the Bay Crossing community of Lewes, DE. Skip was born on January 17, 1943 in Boston, son of the late William L. Mowll Jr. and Maxine J. (Meitzner) Mowll. The family relocated to Delaware in 1950 when his father accepted an engineering position with DuPont. Following in his father’s footsteps, he studied mechanical engineering at Virginia Military Institute (VMI) on a full football scholarship. After a career-ending knee injury, Skip finished his engineering degree, graduating magna cum laude, at Temple University in Philadelphia. He had an illustrious career with a focus on compressors and compressor parts for the oil and gas industries, traveling to South America, Europe, and throughout the U.S. For over 20 years, Skip owned and operated his own engineering company - Mowll Manufacturing & Engineering - which focused on the manufacture of quality compressor parts. Skip held a U.S. Patent for his design of “Packing Case for Cooling Compressors,” which his company manufactured and distributed world-wide. After selling his company, he became the Senior Technical Advisor for Hoerbiger, Inc., an international firm in 47 countries. Skip graduated from Newark High School in 1961 where he was a standout football player and nicknamed “the Rock” for his seemingly immovable presence as a lineman. He was proud to recall that during his three years of high school football and two years at VMI, his teams lost only one game. In 1962, Skip’s VMI team won the Southern Conference championship. Skip was both an “All-State” awardee in football and selected to participate in Delaware's annual “Blue and Gold All-Star” game. He was very competitive whether playing games with family and friends or on the golf course. He played golf with his Bay Crossing buddies for many years, winning the Bay Crossing Golf Tournament twice. His proudest golf moment was getting a hole-in-one on the 17th hole at The Rookery on October 4, 2013. Skip was a “Trainhead” and a “Parrothead.” A passionate model train enthusiast, Skip’s extensive home train layout recreated Rehoboth’s beach and boardwalk. He loved Jimmy Buffett’s music and believed in its positive approach to life. Skip was also an artist, self-taught guitarist, and in his early years was an excellent swimmer. Skip worked as a lifeguard on the Rehoboth Beach Patrol and made several life-saving “saves.” His peers called him “Moose” because he didn’t drag the lifeguard stand to its position on the beach - he carried it on his back! In addition to his parents, Skip is preceded in death by his sister Joan E. (Mowll) Patton. Skip is survived by his wife Pat, brother Charlie Mowll, and two daughters and four grandchildren: Jennifer (Gregory) Mazzola of Chester Springs, PA, and their daughters Lauren and Jessica; and Penelope (Thomas) Baker of Newtown Square, PA, and their children Timothy and Katherine. Skip is also survived by two step-daughters and four step-grandchildren: Melanie (Larry) Switzer of Huntingtown, MD, and their children Zachary and Allison; and Lea (Jeffrey) Wolf of Chestertown, MD, and their children Samantha and Eric. Skip also leaves behind five nephews, one niece and their families. Skip was an active member of Saint Peter’s Episcopal Church in Lewes. He especially enjoyed his service as an usher and working at the annual Church art sale. A Celebration of Life will be held on Saturday, September 18, 2021 at 10:00 AM at St. Peter's Episcopal Church, 200 2nd St. Lewes, DE 19958. In lieu of flowers, donations may be made to the Cape Henlopen Food Basket or Delaware Hospice. Please sign Skip's virtual guest book located on this site.

The family of William L. Mowll III created this Life Tributes page to make it easy to share your memories.

Send flowers to the Mowll family.