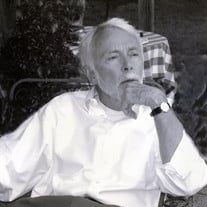 William M. McGee A consummate gentleman If the benchmarks of a person's life include integrity, honesty, kindness, humility, generosity, and moderation in all things, so defines the life of William “Bill” Morrison McGee, who departed this life on November 25, 2021, at age 84. Regarded by most as the consummate, elegant gentleman, Bill was born in Brazil, Indiana, son of Louis and Virginia (Morrison) McGee. As a young man, he was certified as an Eagle Scout, graduated Ball State University with a Bachelor of Science degree and enjoyed membership in the Sigma Phi Epsilon Fraternity. In 1960 he was selected to appear in Who's Who in American Colleges and Universities. He served honorably in the US Army Reserve Program where he attained the rank of Specialist 4. His move to Baltimore in 1961 marked the beginning of an illustrious career as an interior designer, specializing in residential assignments. He enjoyed many multi-generational relationships, working with parents, their children and then their grandchildren. He was a master of color, balance, proportion, and appropriateness, and enjoyed combining the old with the new resulting in a signature, eclectic look. In 1992 he was recognized by Traditional Home magazine as one of the nation's Innovators in Residential Design. Shortly thereafter, several of his commissions were featured in Southern Accents, Baltimore and Style magazines. In 1998, he was featured on the cover of Baltimore magazine voted Baltimore's Best Dressed Man. His homes in Ruxton, Maryland, Baltimore City, and Lewes, Delaware, were all featured in national publications. Bill retired to the Delaware shore in 2002 when he and his partner/husband, of 44-years, John Roman, introduced Circa Home Antiques & Decorative Accessories, to the retail mix on Second Street, in downtown Lewes. The store would remain a presence in the community for nearly thirteen years, before closing in 2013. Circa Home was featured in national and regional publications including Delaware Coastal Press and The Cape Gazette. Both Bill and John enjoyed an active wanderlust, traveling extensively, oftentimes in search of that perfect decorative accessory or work of art. He is survived by his sisters: Nancy Cross of Terre Haute, Indiana and Cindy Robinson of Paris, Illinois; his cousin, Shelley Hatch of Greeley, Colorado; and many nieces and nephews. An older sister, Janet Pell, of Carbon, Indiana, died earlier this year. Bill was a remarkable presence. He will be remembered as a quiet, handsome, kind, gentle, and amazingly talented Prince Among Men. He enriched the lives of so many, and those who knew and loved him are diminished by his departure. Services are private. A Celebration of Life memorial will be held later this year. Please consider a contribution in Bill's memory to: The Historic Lewes Farmers Market, P.O. Box 185, Nassau, DE 19969; or, Cape Henlopen Food Basket, P.O. Box 168, Rehoboth Beach, DE 19971; or, Beebe Medical Foundation, 902 Savannah Road, Lewes, DE 19958; or Delaware Hospice, 100 Patriots Way, Milford, DE 19963.

William M. McGee A consummate gentleman If the benchmarks of a person's life include integrity, honesty, kindness, humility, generosity, and moderation in all things, so defines the life of William &#8220;Bill&#8221; Morrison McGee, who departed... View Obituary & Service Information

The family of William Morrison McGee created this Life Tributes page to make it easy to share your memories.


If the benchmarks of...

Send flowers to the McGee family.