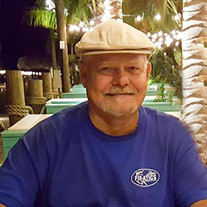 FLORIST NOTE: PLEASE HAVE ALL FLORAL ARRANGEMENTS DELIVERED TO PARSELL FUNERAL HOMES, LEWES, BY 3 PM, WEDNESDAY, AUGUST 5, 2020. William L. Mayo "Bill", age 73 of Millsboro, DE, formerly of Swarthmore, PA, passed away suddenly on Tuesday, July 28, 2020, at Christiana Hospital, in Newark, DE. He was born on November 5, 1946 in Philadelphia, PA, son of Hubert Mayo and the late Judy Pancoast. Bill graduated from the Florida Military Academy and proudly served in the United States Army from 1963 to 1968 during the Vietnam War Era with a rank of Specialist 5th Class. Later, Bill graduated from DeVry Institute of Technology and he also attended the Florida Academy of Dog Grooming in 1974. Bill worked as an HVAC Technician for Eastern University from which he retired in November of 2011. He also owned and operated "Mayo's New Life Pet Care" from 1974 until 1995. Bill stayed active in various associations and clubs. He was the President of the Delaware Valley Dog Groomers Association and a member of the Christian Motorcycle Association of Delaware Valley, PA. Bill was on the board of Trustees of the Brandywine Summit Camp Meeting in 2011 as well as their Financial Secretary. In his spare time, Bill loved boating, gaming, and fishing and was an avid traveler. His favorite trips were to Europe and the Caribbean Islands. He was also a member of the Lighthouse Baptist Church. In addition to his mother, Bill was preceded in death by his son, William Chad Mayo; his in laws, Thomas and Eleanor Miller; his grandparents, William and Sara Pancoast; and his brother, John Kautter. In addition to his father, he is survived by his wife, Margaret E. Mayo, Millsboro, DE; his sons: Cory Mayo (Lindsey) of DE and Troy Mayo (Brenda) of NJ; his grandchildren: Dakota Mayo (Shelby) of NJ, Gabriella DeFrance (Victor) of NJ, Thomas Mayo of NJ, and Erin and Alanna Mayo of DE; his brothers: Randall Mayo (Kim) of Ohio, Rodney Mayo of Ohio, and Richard Kautter (Cindy) of Florida; and his sister, Pam Prim (James) of MD. Funeral Services will be held on Thursday, August 6, 2020, at 11:00 AM at Parsell Funeral Homes & Crematorium, Atkins-Lodge Chapel, 16961 Kings Highway, Lewes, DE where friends may visit beginning at 10:00 AM. Burial will follow the services at St. Peter's Pilottown Cemetery, Lewes, DE. Due to the dangers associated with the spread of Covid 19, all attendees shall wear a mask and maintain social distancing at all times while attending any aspect of the funeral services. In lieu of flowers, memorial contributions may be made to Neimann Pick Disease Foundation, P.O. Box 49, Fort Atkinson, WI 53538-0049. Please sign Mr. Mayo's online guest book located on this site.

The family of William L. Mayo "Bill" created this Life Tributes page to make it easy to share your memories.

FLORIST NOTE: PLEASE HAVE ALL FLORAL ARRANGEMENTS DELIVERED TO...