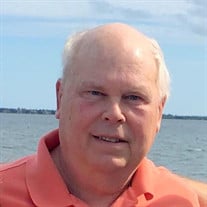 William “Bill” Victor Lometti, age 73 of Lewes, DE, passed away peacefully on Friday, May 21, 2021 at his home, surrounded by his family, following a long battle with prostate cancer. He was born on February 9, 1948 in New York, NY, son of the late Guido and Mary Lometti. A graduate of St. Francis College in Biddeford, ME. Bill had a long and illustrious career in federal law enforcement, beginning in 1970 as a Special Agent with the United States Secret Service in the New York Field Office. Bill served with distinction until 1993, retiring as Assistant Special Agent in Charge of the Newark Field Office. From 1993 until his retirement in 2013, Bill served as the Special Agent in Charge of the EPA Criminal Investigation Division of the New York Field Office. Bill had many interests and hobbies. A history buff, he always enjoyed watching the History Channel and its various programs. He enjoyed gardening and playing with his loyal canine companions. Above all, Bill cherished time spent with those he held most dear ~ his family. He loved telling stories and tales of his life and experiences. Bill was a loving and devoted husband, father, grandfather, brother, uncle and friend. He will be deeply and genuinely missed by all who had the opportunity to know him. Bill leaves behind his beloved wife of nearly 50 years, Susan Spellman Lometti of Lewes, DE; his children: his son Michael Lometti and his wife Judia, his son Brian Lometti and his wife Michelle Arlotta, and his daughter Jennifer Anne Lometti; his grandchildren: Cosmo, Enzo, Arlo and Irish; his siblings: Guy E. Lometti, Christopher Lometti, and Mary Margaret Bendik (Max); his many nieces, nephews, and in-laws; and his adored rescue pup, Peter. In addition to his parents, Bill was preceded in death by his sister, Carol Lometti. Services will be private. In lieu of flowers, the family asks to consider making a donation to Karma Cat + Zen Dog Rescue Society. https://karmacatzendog.org/donate/ Please sign the virtual guestbook located on the tribute page.

The family of William Victor Lometti created this Life Tributes page to make it easy to share your memories.

Send flowers to the Lometti family.