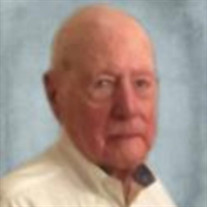 William J. Gehron Retired Foreign Service Officer William "Bill" Jules Gehron, 95, a retired Foreign Service Officer who worked at the White House, the Arms Control and Disarmament Agency and the U.S. Department of State died on May 24, 2020 in Lewes, Delaware. Bill was born in New York City on August 5, 1924 and resided in Pelham, New York. He was the son of William Gehron, a prominent New York architect, and Grace McDermott Gehron. He graduated from Williams College in 1950. Before attending college, Bill served in the Army during World War II, eventually joining General George Patton’s 4th Armored Division as a commissioned officer and platoon leader in the European Theater. His decorations included the Presidential Unit Citation and the Combat Infantryman’s Badge. Bill married Patricia "Pat" Coleman on December 20, 1950 and they would have celebrated 70 years of marriage together this December. Shortly following his marriage, Bill was recalled in the Korean War and served with armored forces at posts in this country. After his duty during the Korean War, Bill returned to New York and in 1953 joined the staff of the Carnegie Endowment for International Peace in NYC as Director of Public Affairs. Bill came to Washington, DC in 1957, residing in Alexandria, VA, where he remained with his wife until their move to Lewes, Delaware in 2007. Bill first served as a member of the White House Disarmament Staff under Harold Stassen. When responsibilities for disarmament negotiations were absorbed by the State Department, Bill became an officer in the Office of the Special Assistant to the Secretary for Disarmament and Atomic Energy Affairs and subsequently its Disarmament Administration group. At the time, presidential candidate John F. Kennedy observed that fewer than one hundred people were working on disarmament matters. Following his election, Kennedy established the Arms Control and Disarmament Agency and Bill became one of the first officers to serve in that organization. In that role, he was on delegations to the United Nations and the Ten Nation Disarmament Talks in Geneva, Switzerland. On his return from overseas he joined the Department of State once again as a Foreign Service Officer in the Bureau of European Affairs. In that capacity Bill was a member of delegations to the North Atlantic Treaty Organization (NATO), the International Conference on Energy and the Conference on Security and Cooperation in Europe. Following his retirement from the State Department in 1985, Bill remained as a foreign affairs analysis and senior advisor working on Freedom of Information projects until 2007. Bill was an avid tennis player, playing well into his 80s. He also loved biking, which he did into his 90s, and downhill skiing into his late 70s. Bill read and traveled widely and he enjoyed writing, including his memoir entitled ‘Ramble: A Memoir.’ Bill is survived by his wife, Patricia Coleman Gehron of Lewes, Delaware; his sons: William Coleman Gehron of Lewes, DE and Michael McDermott Gehron (Nancy) of Falls Church, VA; his daughter, Anne Pyne Holloway (Rex) of Alexandria, VA; and his grandchildren: Katherine Gehron, Luke Gehron, Rebecca Holloway, and Sarah Holloway. Due to COVID-19 restrictions, a Memorial Celebration will be held at St. Peter's Church in Lewes at a later date. Please sign the online guestbook located on the tribute page.

The family of William Jules Gehron created this Life Tributes page to make it easy to share your memories.

Send flowers to the Gehron family.