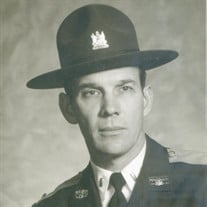 FLORIST NOTE: PLEASE DELIVER ALL ARRANGEMENTS BY 3PM SUNDAY, AUGUST 11, 2019 TO OUR LEWES LOCATION. William "Bill" Thomas Willin Jr., age 85 of Lewes, DE, passed away on Saturday, August 3, 2019, at Christiana Care Health Systems, in Newark, DE. He was born Friday, April 6, 1934 in Salisbury, MD, son of the late William Thomas Willin, Sr. and Elizabeth (Wilson) Willin. Bill became a Delaware State Trooper March 1, 1957 with the 17th Academy Class and retired March 1, 1977 as Captain. During his career, Bill was assigned to Troops 2, 4, and 7 and Headquarters. He worked traffic, investigation, and aviation. Bill was assigned as pilot of 1st Department Airplane in 1965 and as Avaition Section Commander of 1st Department Helicopter in 1971. He was a life member of the Association of Delaware State Police and a faithful member of Groome United Methodist Church in Lewes. Bill enjoyed all things outdoors; especially golfing, hunting, caring for his yard and landscaping (in which he took great pride), and watching the ducks in his backyard pond. He enjoyed playing bridge and was an avid antique collector. Above all, Bill cherished time spent with those he held dear. He was a loving and devoted husband, father, stepfather, grandfather, brother, and friend who will be deeply missed by all who knew him. In addition to his parents, Bill was preceded in death by his wife of 40 years, Marie Stockley Willin in 2010; and his sister, Margaret Ann Willin. He is survived by his wife of 7 years, Barbara (Auslund) Willin of Lewes, DE; his son, William T. Willin of Rehoboth Beach, DE; his step-children: Barbara DeVries of Wilmington, NC, Cornelius John DeVries of CA; Diane Marie Salen (Rick) of Calvert Beach, MD, and Kathryn Jean Coursey of Mt. Airy, MD; his brother, John Willin (Carol) of Laurel, DE; his sisters-in-law: Katherine Ritter (Ronnie) of Lewes, DE and Mary Banks (David) of Georgetown, DE; his 11 grandchildren; his 10 great-grandchildren; and his numerous nieces and nephews. A Memorial Service will be held on Monday, August 12, 2019, at 11:00 AM at Parsell Funeral Homes & Crematorium, Atkins-Lodge Chapel, 16961 Kings Highway, Lewes, DE, where friends may visit beginning at 10:00 AM. Interment will be private. In lieu of flowers, the family suggests contributions in Bill's memory to Groome United Methodist Church, 601 Savannah Road, Lewes, DE 19958. Please sign the online guestbook located on this site.

The family of William "Bill" Thomas Willin Jr. created this Life Tributes page to make it easy to share your memories.

Send flowers to the Willin family.