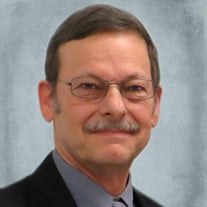 Wayne Hartschuh, PhD Wayne Hartschuh was born to Lester and Edna Hartschuh on October 17, 1954 in Akron, Ohio. He died on May 7th, 2020 in Lewes, Delaware, with his wife, Karen, by his side after losing his battle with pancreatic cancer. He was 65 years old. Wayne was preceded in death by his father, Lester Hartschuh. He is survived by his wife, Karen Hartschuh, daughter, Jennifer Ahlgren, son-in-law, Erik Ahlgren, grandsons, Jacob and Joshua Ahlgren, son, Robert Dixon, mother, Edna Hartschuh, brother and sister-in-law, Gordon and Sue Hartschuh, nephew Dr. Ryan Hartschuh and his family (wife, Betsy, and children Audrey, Claire, and Drew), nephew, Jonathan Hartschuh, mother-in-law, Nancy Kubik, brother-in-law, Ed Kubik, and niece, Alexa Kubik. Wayne spent his childhood in Ohio, then moved to Tempe, AZ, where he received a Bachelor of Arts in Education with a specialty in Mathematics from Arizona State University (ASU). Upon graduation from ASU, Wayne accepted a teaching job at Buckeye Union High School (BUHS) in Buckeye, AZ, teaching high school math and computer science for eleven years. While there, he coached football, basketball, and baseball. As the head baseball coach, he led teams to two conference championships and three state tournament appearances. During his time at BUHS, Wayne earned a Master of Science degree in School Computer Studies from Northwest Missouri State University. After completing his master’s degree, he left Buckeye to pursue a doctorate degree at ASU. While working on his doctorate he spent two years in Kansas City, Missouri where he taught computer science, programming and coached baseball in the Kansas City, Missouri school system. He returned to Arizona to complete his doctorate degree in Curriculum and Instruction with a specialty in Computer Studies from ASU. After earning his doctorate, he moved to Findley, OH, where he taught as an assistant professor at the University of Findlay. After one year in Findlay, he accepted a position with the Delaware Department of Public Instruction (now the Department of Education) and took on the challenge of wiring every public school classroom in the state for Internet access. His efforts earned his office a Smithsonian Award. Once schools were wired, the next challenge was to ensure educators had the tools and knowledge to utilize the Internet in their classrooms. Dr. Hartschuh did that as the Executive Director for the Delaware Center of Educational Technology (DCET), where he and his staff managed grants, developed curriculum, loaned out technology equipment, refurbished technology equipment, and organized the annual Delaware Instructional Technology Conference. National and international speakers were keynotes at these conferences. He also brought online learning to educators and students in the state. During his time as the Executive Director of DCET, Wayne served 6 years on the Board of Directors (3 years as Chair) of the State Educational Technology Directors Association (SETDA), a national organization consisting of the 50+ state educational technology directors. He received their highest honor, the State Leader of the Year Award in 2012. Dr. Hartschuh was also an adjunct faculty member at Wilmington University from 1998-2019, where he developed and taught courses in the Applied Technology in Education Master’s program. Wayne often credited his move to Delaware with meeting Karen. They got engaged at Yankee Stadium where his Cleveland Indians defeated her New York Yankees. He told anyone who would listen that she was the greatest thing that ever happened to him, and her care of him during his illness demonstrated that. During their time together, they traveled to Hawaii, Canada, Alaska, Mexico, Ecuador, Galapagos, and most of the US. Wayne testified before Congress, drove on the Monster Mile, pitched to Baseball Hall of Famer, Bob Feller, rang the bell at the NY Stock Exchange, attended an inaugural ball, and rode a LOT of rides with Jacob and Josh. After retirement, he enjoyed traveling with Karen, attending Spring Training, watching baseball, playing golf, and counting horseshoe crabs. Special thanks to the medical and support staff who treated and helped Wayne through this journey - Dr. Jamal Misleh, Jodie Delesio, Michele Glick, Nicole Vines, Tami, Gina, and the wonderful infusion team at Medical Oncology Hematology Associates; Dr. William Egan; Dr. Jorge Uribe; Dr. Joseph Rubacky; the oncology unit (6E) at Christiana Hospital, and the Christiana VNA staff who helped him at home - Mary Gallagher, Morgan Shahan, Liz, and Pam. Due to the Corona Virus, a celebration of life will be held at a future date. Please sign the online guestbook located on the tribute page.

Wayne Hartschuh, PhD Wayne Hartschuh was born to Lester and Edna Hartschuh on October 17, 1954 in Akron, Ohio. He died on May 7th, 2020 in Lewes, Delaware, with his wife, Karen, by his side after losing his battle with pancreatic cancer. He... View Obituary & Service Information

The family of Wayne Holt Hartschuh created this Life Tributes page to make it easy to share your memories.

Send flowers to the Hartschuh family.