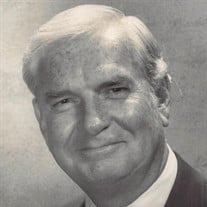 Walter Jarvis Ellis Walter J. Ellis, age 93, of Rehoboth Beach, DE, formerly of Dover, passed away at home on Thursday, February 11, 2021. Walter was born in Pennsylvania on March 9, 1927, son of the late Joseph Ellis and Vera McClernan Ellis. He was raised in Wilmington and graduated from Conrad High School where he was an accomplished basketball player and captain of the team. Following high school, he enlisted in the Navy where he served in the Pacific Theater. After his service, he was appointed to West Point, but chose to attend the University of Delaware where Walter was a member of the Theta Chi Fraternity and made many lifelong friends. After college, Walter met and married the love of his life, Thelma Lou Townsend. Walter was a real estate developer in Dover, building many of the residential and commercial neighborhoods in Kent County. He co-founded Lore & Ellis Realty in 1966 which became Burns & Ellis Realtors when his daughter and son-in-law, Terry and Tom Burns, joined him in the business. He grew his real estate business into a prominent Dover institution, which still thrives today. He was dedicated to his industry and served as the President of the Delaware Association of Realtors and was a Regional Vice President of the National Association of Realtors. He loved and was loved by his agents, staff, clients, tenants, and all those who worked with and around him for over 50 years. Walter loved his friends, golf, fishing, Eagles football, and gardening. He touched so many people with his kindness, enthusiasm, wit, and was a true gentleman. He was a member and former President of Maple Dale Country Club in Dover. He was a member of Rehoboth Beach Country Club where he contributed so much to the growth of the club as the Green Committee chair and a member of the Board of Governors. He enjoyed playing with a multitude of members, young and old, during his weekly outings. Most of all, he loved and was devoted to his family. He gave all of us a wonderful life and we will remember him with love and joy. He is predeceased by his sister Vera Snedeker. He is survived by his wife of 68 years, Thelma Lou, and two loving daughters, Terry Burns of Dover and Lou O’Brien of Rehoboth Beach; sons-in-law Tom Burns and John O’Brien; brother Joseph Ellis (Dorothy) and many nieces and nephews, including his special nephew Fred Townsend. Walter is also survived by four grandchildren whom he loved dearly, and they in return, and their spouses: Tommy and Astrid Burns of Dedham, MA, Lizzie Burns and Mike Smith of Wellesley, MA, Walter O’Brien and Rachel Temple of Bear, DE and Ali O’Brien of Rehoboth Beach; two great grandchildren whom he adored, Sigrid and Ellis Burns, and two more on the way whom he already loved, in the Burns/Smith family and O’Brien/Temple family. A celebration of life overlooking the Rehoboth Bay is planned for Summer 2021. In lieu of flowers, contributions may be made in Walter’s memory to Delaware Hospice, 100 Patriots Way, Milford, DE 19963.

The family of Walter Jarvis Ellis created this Life Tributes page to make it easy to share your memories.

Send flowers to the Ellis family.