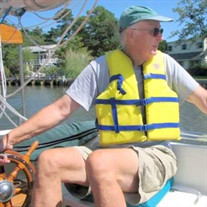 Walter Crafts Jr., age 86 of Lewes, DE, passed away on Thursday, December 17, 2020 at Beebe Healthcare. He was born on November 3, 1934 in Flushing, NY, son of the late Walter and Suzanne (Clifton) Crafts. Walter spent his childhood years in Niagara Falls, NY. He attended the DeVeaux School, a military prep school founded in 1852 and administered by the Episcopal Diocese of Western New York. Walter first attended Oberlin College in Ohio and subsequently received a Bachelor of Science degree in Management and Production from Babson College in Wellesley, MA. While at Babson, he was a member of the Student Government, the Delta Sigma Pi business fraternity, and the Blue Key National Honor Fraternity. Volunteering for the military draft in 1954, Walter became an aircraft and engine mechanic with the US Army and was stationed in Ft. Knox, KY, Gary Air Force Base in San Marcos, TX, Camp Kilmer, NJ, Augsburg, Germany, and Ft. Ord, CA. While at the Frontier Rubber Company in Niagara Falls, he developed skills in metal machining, arc-welding, oxy-acetylene cutting, and molding rubber products. Working for the High Energy Fuels Division of the Olin Mathieson Chemical Corporation in Niagara Falls, Walter became a tabulating machine operator, and subsequently a computer programmer and systems analyst, developing administrative payroll and inventory applications. After taking the Federal Service Entrance Exam in 1961, Walter began work for the General Services Administration in Washington, DC as a public utilities specialist in stocks, bonds, and investments. Shifting into the telecommunications area, he became an analyst working on the initial stages of the Bell System divestiture. Transferring to the Social Security Administration (SSA) in Baltimore, MD, Walter specialized in SSA's voice communications requirements, preparing and justifying budget requests, writing and evaluating telephone system requests for proposals, and writing regulatory policy and directives for SSA to purchase, install, and manage its communications systems. He developed algorithms for sizing SSA's nationwide call centers in the absence of traffic study data. Walter was the first to run Telecommunications Devices for the Deaf conversations through automatic call distributors and served as a consultant to other federal agencies and private industry. In Baltimore, Walter was a Scoutmaster of Boy Scouts of America (BSA) Troop 336, at St. Agnes Church for three years. Retiring to Lewes, DE, he was able to continue a lifelong love of sailing. His first unsupervised night watch at 11 years of age was on a 40' "R" Class sloop, traveling west from Youngstown, NY to Hamilton, Ontario. In Lewes, Walter acquired an 18' catboat, which he sailed solo to Cape May several times. His first major boat purchase while living in Washington, DC, had been a Columbia 31. More recently, he was a partner on an Ericsson 27. Above all, Walter cherished time spent with those he held most dear and was a loving and devoted husband, father, grandfather, brother, and friend. He was loved by many and will be deeply missed by all who knew him. Walter is survived by his beloved wife, Mary Beth Crafts of Lewes, DE; his son, Walter "Mike" Crafts of Los Angeles, CA; his daughter, Susan Spencer and her husband Jason of Indian Rocks Beach, FL; his granddaughters, Maria Eduarda and Abigail Elizabeth of Redondo Beach, CA; and his sister, Suzanne Crafts of E. Boothbay, ME. Walter is also survived by his nieces, Louisa and Susanna and his nephew, Joseph, along with five grand nieces and nephews and one great grand niece. Services will be private. Please sign Walter's online guestbook located on the tribute page.

The family of Walter Crafts Jr. created this Life Tributes page to make it easy to share your memories.

Send flowers to the Crafts family.