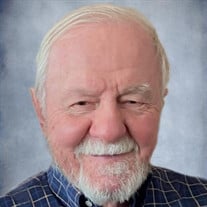 Wallace Ray Clark “Walt” “Wally,” passed away on December 11, 2021, at Delaware Hospice Center in Milford, DE. He was born on September 2, 1932, in Saginaw, MI, son of the late James E. and Mabel J. (Oldenburg) Clark. Walt earned a degree in Accounting from Michigan State College, Class of 1954 and had a career as a traveling salesman for a publishing company in New York City. He moved to Kutztown, PA in 1964 and later to Wyomissing, PA. He lived in Rehoboth Beach, DE from 2012 to the time of his passing. Walt loved sitting on the beach and walking on the boardwalk with his wife Helen. He loved reading historical nonfiction and doing word search puzzles. He loved dogs, especially Buddy, his Aussie that he had for 10 years. He took Buddy with him everywhere he went. He enjoyed spending time at the American Legion Post 17 in Lewes, talking with his friends. Walt was a kind person and a true gentleman who was liked by everyone he met. He was a sensitive and sentimental soul who cared deeply for his loved ones and will be greatly missed by all. In addition to his parents, Walt was preceded in death by his brother, William Clark and his stepdaughter, Deborah; and his sister, Joyce Updegraff. He is survived by his beloved wife, Helen L. Clark; his children: John (Fumi), William (Cheryl) and Elizabeth (Mark); his 10 grandchildren; his stepdaughters: Alice (Chris), Tracy, Jennifer (Jon); and his stepson-in-law, Dan. A private family graveside service will be held at Forest Hills Cemetery in Reading, PA. Please sign the virtual guestbook located on the tribute page.

The family of Wallace Ray Clark created this Life Tributes page to make it easy to share your memories.

Send flowers to the Clark family.