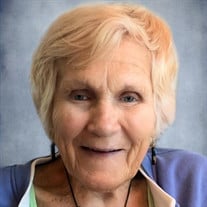 Victorine "Vicky" S. Mertes, age 95 of Indian Beach, Rehoboth, peacefully passed away on Saturday, December 12, 2020. She was born in Philadelphia, PA on March 12, 1925, daughter of the late Elsie Blanche (Hutchinson) and T. Henry B. Sanders. Vicky graduated from Temple University High School in 1943 and attended Temple University and Drexel University. She then began working in the Petroleum Lab at Sun Oil Company in Marcus Hook, PA toward the end of World War II. After marrying, Vicky moved to Wilmington, Delaware and shortly before the birth of her daughter, became a full-time homemaker. As her children got older, she became a runway model with the Philadelphia Models Guild, appearing in many fashion shows in the Philadelphia and Wilmington areas. Once her children entered college, Vicky moved permanently to the family home in Indian Beach, where she resided until her death. In 1975 Vicky became an employment specialist with the Delaware Department of Labor at their Georgetown office, where she worked until her retirement in 1990. While at the DOL she also managed the Department’s Summer Employment Office in Rehoboth Beach, assisting many young people finding summer jobs and helping others to find more permanent employment. Over the years Vicky was a member of the Indian River Yacht Club and the Rehoboth Bay Sailing Association, where she volunteered on race committees for sunfish and lightning races, in order to watch her children participate in the sailing races. She was also a member in the early days of Possum Point Players, the Rehoboth Art League, and the Sussex YMCA, attending several classes a week until two years ago and serving as an inspiration to many people younger than herself. Vicky also served on the boards of Save the Inland Bays and Sussex RSVP (Retired Senior Volunteer Program). She liked playing the piano, painting on driftwood, taking photographs, and gardening for which she most definitely had a green thumb. Vicky enjoyed traveling, especially a trip to Hong Kong in 1976, where she sailed on the South China Sea with friends, and several trips to Hawaii. In recent years she liked vacationing in St. Pete Beach, Florida with her daughter and son-in-law. She also enjoyed visiting with her young grandson and his mother, following his academic achievements and participation in sports with great interest and enthusiasm. However, she was always happiest at home being able to watch the seasons change on Rehoboth Bay. In addition to her parents, Vicky was preceded in death by her former husband, Thomas S. Mertes; her son Frederick Mertes; and her sisters: Elsie Florence and Harriet “Sandy” Lee. She is survived by her daughter, Carol Mertes-Smith and her husband Gary Smith of Milton, DE; her daughter-in-law, Susan Hughes Mertes of Annapolis, MD; her beloved grandson, Wil of Annapolis, MD; her brother, Tom Sanders and his wife Deborah of Atlanta,GA; and her many nieces, nephews, great-nieces, and great-nephews. A memorial service will be private. In lieu of flowers, the family suggests contributions in Vicky's memory to Shriners Hospitals for Children, Processing Center: PO Box 863765, Orlando, FL 32866, St. Jude Childrens Research Hospital, 501 St. Jude Place, Memphis, TN 38105, or Delaware Hospice, 100 Patriots Way, Milford, DE 19963. Please sign the online guestbook located on the tribute page.

The family of Victorine S. Mertes created this Life Tributes page to make it easy to share your memories.

Send flowers to the Mertes family.