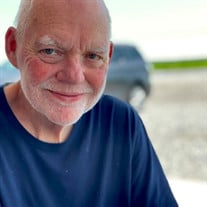 Tommy Joe Little, Proud Navy Veteran, Husband, and Father Tommy Joe Little, 73, passed away at his home in Millsboro, DE on Sunday, August 1st after finding well-deserved peace from his battle with Alzheimer's. He is survived by Shane Little, his wife of 32 years; his brother Brad; his mother Charlie Ruth; his children Tom, Taylor & Alyx; and several beloved cousins, nieces, nephews, and grandchildren. A proud and humble man, Tommy sacrificed the majority of his life to his country, wife, and children. Born in Detroit Michigan, he moved to Heavener, Oklahoma with his mother, and father Lucian Miles, where he spent the majority of his childhood. After graduating from Heavener High School, where he served as a varsity football captain, Tommy enlisted in the United States Navy, and eventually earned his Masters in Business and Hospital Administration as a graduate from the Naval Postgraduate School. After 22 years of service, he retired as a Lieutenant Commander, earning a National Defense Service Medal, Unit Commendation Award for Scholastic Achievement, Navy Commendation Medal, Meritorious Service Medal, and many other nods of leadership and character along the way. After retirement, Tommy led his wife and children the only way he knew how - with flexibility, and fervor. After moving from state to state to find sustainable work, he and his family permanently settled in Rehoboth Beach, the place where his family still reside today with great pride. He was a man of many skills, and held several management positions in real-estate, custom-closet design, hospitality, and contracting before finally retiring at the age of 69. As his children grew, his sole mission was to help them find their way, no matter the cost. He offered his wisdom and leadership as a volunteer on many of his sons' youth sports teams, serving as an assistant baseball coach on Rehoboth's District Championship Little League team in the late 90's, and as an assistant football coach on Cape Henlopen's first ever Pop Warner team. His leadership, mentorship and hard work allowed all of his children a chance to further their education after high school, and after his daughters had children of their own, he never batted an eye at the chance to open his home for extended, or temporary stays, no matter how short of notice. Tommy's legacy, and dedication to his family and his country should be carried on by all of those who were lucky enough to know him a friend, colleague, or relative. A private service will be held at the Delaware Veteran's Memorial Cemetery this fall. In lieu of flowers, friends may support the Delaware Hospice Center at 100 Patriots Way, Milford, DE 19963. His family extends an undying gratitude to their administration and staff for the kindness, compassion, and support they provided Tommy over the course of the last several months. Please sign the virtual guestbook located on the tribute page.

Tommy Joe Little, Proud Navy Veteran, Husband, and Father Tommy Joe Little, 73, passed away at his home in Millsboro, DE on Sunday, August 1st after finding well-deserved peace from his battle with Alzheimer's. He is survived by Shane Little,... View Obituary & Service Information

The family of Tommy Joe Little created this Life Tributes page to make it easy to share your memories.

Send flowers to the Little family.