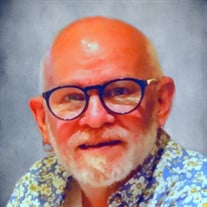 Timothy W. McNitt age 61 of Lewes, DE passed away unexpectedly on Saturday, October 16, 2021. He was born on October 03, 1960, in Lewistown, PA, son of the late William K McNitt, Sr. and Betty J. (Shay) McNitt. Tim was a 1979 graduate of Elizabethtown Area High School, attended Elizabethtown College, and was a proud veteran, having honorably served in the US Army. Tim wore many hats in life, but cooking was his passion. He worked in the restaurant industry since he was 15. He soon realized he was happier in the kitchen rather than the front of the house. Tim learned many skills under the tutelage of several competent chefs in Pennsylvania and Colorado. He came to Rehoboth beach in 1997 with whatever he could fit in his car and his beloved poodle Jackson. Tim worked at the Iguana Grill and Sydney’s Side Street Cafe before he landed at the Back Porch Cafe, where he worked, and learned, from executive chef Leo Medisch. Under Leo’s mentorship, he learned the intricacies of running a commercial kitchen. They used the farm to table concept, using locally sourced product, years before it became popular. When Leo passed in 2013, Tim, while dealing with the grief of losing his friend and mentor, took on the position of the executive chef. He continued quality cuisine and service to honor that legacy. Leo taught him “respect the food and respect yourself “, a mantra Tim embraced until he died. Tim succeeded brilliantly. As he continued to grow and learn as a chef, he managed to raise the bar that he inherited and was often interviewed, and written up, in food columns and magazine articles about fine dining in Rehoboth. Tim was a modest and very private person who did not seek praise or notoriety. He didn’t like coming out of the kitchen and into the dining rooms, even when customers wanted to complement him personally. Tim allowed the food on the plates to say everything one needed to know about his creativity and dedication to his craft. He remained at the Back Porch Cafe until early 2020. In the fall of 2020, until his death, he was Chef Tim at the Harbour Restaurant at Canal Square in Lewes, DE. Tim often worked with Loraine and Gary at Palate during the off-season, and he joined the team at Harbour Restaurant as a full-time member when they opened in the fall of 2020. He was a “beloved chef who was both a mentor and an inspiration to our kitchen team. “ Tim will be deeply missed by family, friends, coworkers, and anyone who ever had the honor to know him. Keith Fitzgerald said it best: “Tim could be like a toasted marshmallow, crusty and rough on the outside but sweet, warm, and soft on the inside. “ In addition to his parents, Tim was preceded in death by his brother Samuel McNitt and nephew Nathan McNitt. Tim is survived by brothers: William K McNitt, Jr. (Deborah ),of Harrisburg, PA, Matthew S. McNitt ( Mary), of Bainbridge, PA, and Jacob A. McNitt of Elizabethtown; and his several nieces and nephews. A memorial service will be held at Harbour Restaurant at Canal Square in Lewes, DE, on November 8, 2021, at 1:00 PM. A graveside service will be held at Juniata Memorial Park in Lewistown PA, on November 13, 2021, at 11:00 AM. In lieu of flowers, the family asked that donations be made, in Tim ‘s memory, to the Delaware Humane Association, Midway Plaza, 18675 Coastal Highway, Rehoboth Beach, DE19971. Please sign the virtual guestbook located on the tribute page.

The family of Timothy W. McNitt created this Life Tributes page to make it easy to share your memories.

Send flowers to the McNitt family.