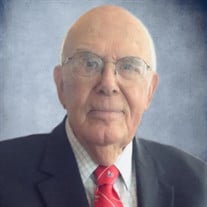 Captain T. Rowland Marshall, III At the age of 100 years, Thomas Rowland Marshall, III died peacefully in his home on Lewes Beach facing the bay on April 30. 2022. He was born January 22, 1922, to Joseph L. Marshall and Susan Watts Marshall in Beebe Hospital Lewes, Delaware. He was a generous man with a clever sense of humor who never met a stranger. Rowland graduated from Lewes High School in 1940 where he participated in sports and played trombone in the band. He was a camp counselor at the Children’s Beach House as a young teen. Later in life, he served on the CBH Board of Directors for many years and initiated a golf tournament fund raiser that is still held each year. After spending a brief time at the University of Delaware, he was taken apprentice in the Pilots Association of the Bay and River Delaware as WWII was starting. During the war, he was commissioned into the United States Coast Guard with the Pilot’s Association. Rowland served as President of the Pilot’s Association from 1967 to 1973, retiring in 1991. He loved being a river pilot like his grandfather before him. Rowland married Marian Catherine Hocker on July 25, 1945, at the Lewes Presbyterian Church in his dress white Coast Guard uniform. The young couple, lived on Lewes Beach while they started their family. In 1954, the Marshalls moved to Wilmington, Delaware as Rowland was one of the pilots licensed to navigate ships through the Chesapeake and Delaware Canal. The family returned to Lewes every summer where life revolved around enjoying the beach and the bay. Sailing Sailfish and eventually Mobjacks out of the Lewes Yacht Club, Rowland was a winning competitor. Rowland and his fellow sailors built the first Delaware Bay Sailfish in his garage on Bay Avenue. He was a Life Member of the Lewes Yacht Club and a Life Member of the International Mobjack Association. Rowland served as Commodore of LYC from 1957-58. He was inducted into the Maritime Hall of Fame in 2008. Rowland was a devoted member of St. Peter’s Church in Lewes, serving on the Vestry and singing bass harmonies in the choir for many years. He was an accomplished carpenter and antique furniture refinisher and he put these skills to work at St. Peter’s Church and the Lewes Historical Society in its’ infancy. Rowland was preceded in death by his wife Marian having been married for 69 years and their son, Thomas R. Marshall, IV. His sisters, Mother Virginia of All Saint’s Convent, Catonsville MD, Sue Schell Preston Dean of Vero Beach, and Lillian M. Burris of Milford and Lewes. Rowland is survived by his daughters: Constance Marshall Miller (John) and Linda M. Fischer (Bobby) both of Lewes; 10 grandchildren: Katy Fischer (Ben), John David Miller (Carly), Abigail L. Miller, Amanda M. Fischer (Max), Hannah Petterson (Jordan), Taylor M Keen, Artie Fischer (Leah), Meredith M. Marshall, Joseph Andrew Miller, and Thomas R. Marshall, V (Bridget); 10 great grandchildren whom Cap cherished: Hayden and Reese Petterson, Zane, Luca, and Avary Miller, Juniper Davis, Joseph Keen, Thomas and Nellie Marshall, and Helen Fischer. There are many devoted, extended Marshall family members who all meant so much to Rowland. The family wants to thank his caregivers, Dee MacIntire and Gina Mifflin and her crew who took such very good care of Rowland. Thanks, also, to Delaware Hospice. Funeral services will be held on Monday, May 16, 2022, at 11:00 AM, at Saint Peter’s Church, Second Street, Lewes, DE, where friends may greet beginning at 10:00 AM. Burial will be private. In lieu of flowers, memorial contributions may be made to St. Peter’s Church, Open Door Campaign, P.O. Box 464, Lewes, De 19958. Please sign the virtual guestbook located on the tribute page. FLORIST NOTE : PLEASE DELIVER ALL ARRANGEMENTS BY 3:00 PM ON SATURDAY, MAY 14, 2022 AT OUR LEWES LOCATION.

The family of Thomas Rowland Marshall, III created this Life Tributes page to make it easy to share your memories.