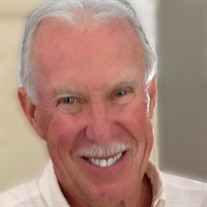 Thomas Lynn Eichler, of Camden and Lewes, DE, 76, left us suddenly on March 12, 2020. He was an extraordinary man in many ordinary ways and his strong presence will be sorely missed. For all who knew and loved him, Tom was renowned for his love of a good story, his quick wit, and his strong handshake. He had a genuine interest in people and never met a stranger. Tom loved golfing at Wild Quail Country Club, catamaran sailing, fishing, airplanes of all kinds - especially his solo flight in 1970, kite flying, and most importantly physical fitness. Tom set a high bar for himself after a heart attack at age 51. His incredible fitness motivated many and allowed us to enjoy his presence much longer than his caring doctors expected. They marveled at his determination to challenge his compromised heart. The son of the late Harold and Pauline Eichler, Tom was born on June 3, 1943 in Hillsdale, Michigan. He grew up in Reading, Michigan and graduated from Reading High School in 1961. The memories created became part of his large repertoire of stories to share and each special relationship was sustained long term and valued by him to this day. Tom remained a lifelong fan of the Reading Rangers and a true blue U of M football fan. Tom’s next journey took him to Disney Studios in California. Upon his return to Michigan, he attended Hillsdale College and operated the Eichler Paint Store in Jonesville. He entered into his 40 year career of Banking and Finance starting with the Citizens National Bank in West Unity, Ohio. He later became a licensed real estate agent in both Ohio and Delaware. Tom moved to Delaware in the mid 1990’s and later met his wife, Katrina (VanderVeen). Unbeknownst to either of them, she grew up within 20 miles of Tom. They were destined to meet - and did - while exercising in Camden, DE. It became Tom’s favorite story to tell. Tom was predeceased by his brother, Robert Eichler, his brothers-in law, Warren Price and Patrick VanderVeen, and his twin grandsons, Matthew and Pattrick Propst. He leaves behind his treasured wife, Katrina Eichler. He will be missed dearly by his sister Colleen Forrester (Bill) of Royal Oak, MI, his mother-in-law (and his fierce jeopardy competitor) Jane VanderVeen, of Lewes, DE, his sister-in-law, Linda Price of Wellington, FL, and his sister-in-law, Laurie VanderVeen, of Havertown, PA. Holding tight to his memory are daughters Lynnette Rittenhouse (Ken) of Hillsborough, NJ, Carrie Adkins (Paul) of Camden, DE, Erica Eichler of Mason, OH, and his step-children Gavin Furlong (Dawnyel) of Lewes, DE, and Logan Furlong (Steve) of Wilmington, DE. Tom loved his 13 grandchildren, his newly born great-grandson, and many nieces, nephews and cousins. A celebration of Tom’s life will be held at a later date. In lieu of flowers, please simply pass on Tom’s smile and laugh to someone who needs it and consider a donation in his name to the American Heart Association. Please sign Tom’s online guestbook located on this site.

Thomas Lynn Eichler, of Camden and Lewes, DE, 76, left us suddenly on March 12, 2020. He was an extraordinary man in many ordinary ways and his strong presence will be sorely missed. For all who knew and loved him, Tom was renowned for his... View Obituary & Service Information

The family of Thomas Lynn Eichler created this Life Tributes page to make it easy to share your memories.

Send flowers to the Eichler family.