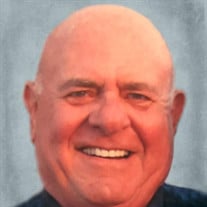 Dr. Thomas Kenneth Baker, age 87 of Bethany Beach, DE, passed away peacefully on Saturday, February 6, 2021 at his residence, in South Bethany Beach, DE., surrounded by his loving family. He was born on October 4, 1933 in Sudlersville, MD, son of the late Kenneth W. and Sara (Huffington) Baker. Tom attended Bridgeville High School, where he played football and was an Eagle Scout. He also attended Bullis Prep and the University of Delaware where he wrestled and was a member of Sigma Nu fraternity. He graduated from the University of Pennsylvania Dental School in 1959. Tom was a Captain in the United States Army Dental Corps, a Mason, and a member of Kiwanis. He had a dental practice in his hometown of Bridgeville for 40+ years. Tom and his wife built a beach home in South Bethany Beach in 1968 where they later retired and spent many wonderful years graciously welcoming friends and family to a home filled with laughter, fun, and sand. Tom was a true American Patriot, with a deep Christian faith. He was a member of Union United Methodist Church in Bridgeville where he sang in the choir. Tom was a lifelong athlete who enjoyed jogging before it was popular, swimming in the ocean and walking on the beach. He had a wonderful quick wit with a sense of humor that was not necessarily proper but always funny. He will be deeply missed by many. In addition to his parents, Tom was preceded in death by his sister, Kaye Baker Norwood and her husband, Tom; his brother-in-law, Richard Lewis and his wife, Kay. He is survived by his loving wife of 64 years, Sally Ann Lewis Baker; his daughter, Cheryle Baker Dusinberre (Dean); his son, Kenneth Baker (Ann); his grandchildren: Sarah Brennan (Matt), Brittany Baker (Ryan), Cassidy Baker, and Jake Dusinberre. Services will be announced at a later date. Memorial contributions may be made in Tom's memory to Delaware Hospice Center, 100 Patriots Way, Milford, DE 19963 or the charity of your choice. Please sign the virtual guestbook located on the tribute page.

Dr. Thomas Kenneth Baker, age 87 of Bethany Beach, DE, passed away peacefully on Saturday, February 6, 2021 at his residence, in South Bethany Beach, DE., surrounded by his loving family. He was born on October 4, 1933 in Sudlersville, MD,... View Obituary & Service Information

The family of Dr. Thomas Kenneth Baker created this Life Tributes page to make it easy to share your memories.

Send flowers to the Baker family.