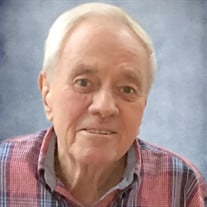 Thomas Roy Anderson, age 80 of Lewes, DE, passed away on Thursday, February 6, 2020 at his home. He was born on March 7, 1939 in Oakmont, PA, son of the late Roy G. and Elizabeth J. (Silcox) Anderson. Mr. Anderson graduated from high school in Oakmont, PA and attended Greenville College in Greenville, IL. He was a proud veteran, honorably serving in the US Army from 1962-1964 and continued his patriotism as a member of the American Legion. Mr. Anderson started his career in banking and finance in Pittsburgh, PA. From there, he moved to Maryland and worked for an auction company, heavy duty equipment sales company, and also managed the US Car Show in Baltimore, MD for many years. Upon retiring in 2007, Mr. Anderson was one of the first volunteers at the Fort Miles Historical Association and for 10 years was a part of the "Bunker Busters", restoring Battery 519. He was awarded the Lee Jennings Award in 2018. In his spare time he enjoyed golf, hunting, and relaxing at the beach. Above all, Mr. Anderson cherished time spent with those he held most dear. He was a loving and devoted husband, father, grandfather, brother, and friend who will be deeply and genuinely missed by all who knew him. Mr. Anderson is survived by his beloved wife of 52 years, Virginia (Kantsi) Anderson of Lewes, DE; his son, Ryan Anderson (Ashley) of Gambrills, MD; his daughter, Beth Skaradek (Joe) of Gambrills, MD; his grandsons: Ethan and Logan Skaradek; his granddaughters: Kailey, Kirra and Lila Anderson; his brothers: Robert Anderson of Lewes, DE and Tim Anderson of Boynton Beach, FL; sisters-in-law: Evelyn Pappas of Monessen, PA and Mary Ann Martinak of Perryopolis, PA; his extended family; his "Bunker Busters"; and his loyal canine companions, Andy and Penny. A celebration of Mr. Anderson's life will be held on Saturday, March 7, 2020 from 12:00 PM to 2:00 PM at the Fort Miles Museum in Cape Henlopen State Park, Lewes, DE. Contributions may be made in Tom's memory to the Fort Miles Historical Association, 120 East Wild Rabbit Run, Lewes, DE 19958. Please sign the online guestbook located on the tribute page.

The family of Thomas Roy Anderson created this Life Tributes page to make it easy to share your memories.

Send flowers to the Anderson family.