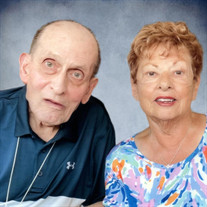 Robert Peter Shavor, age 83 of Lewes, DE passed away on Wednesday, November 10, 2021, at Brandywine Senior Living, in Rehoboth Beach, DE surrounded by his wife, son, daughter and son-in-law. He was born on January 25, 1938, in Homestead, PA, son of the late Peter and Anna (Garrigan) Shavor. Just a few weeks later, his beloved wife of 62 years, Sonja Herta (Killian) Shavor, age 84, passed away at home, surrounded by her daughter and son-in-law, on Sunday, December 19, 2021.She was born on November 30, 1937, in Amsterdam, Netherlands but she was raised in Lahnstein, Germany (in the beautiful Rhine River Valley), daughter of the late Albert Killian and Petronella (Koenig) Killian. Mr. Shavor was a graduate of Duquesne University in Pittsburgh, PA. After his graduation from college, their love story started in 1959 when they met at a dance in Miami, FL and married only five days later. It seems fitting that they would pass away within a short time of each other as well. They began their life together and raised their family in Harrisburg, Pennsylvania. Throughout his lifetime, Mr. Shavor held several political offices in local government and once served as Paxtang Borough’s Mayor in the mid 1970’s. He was a longtime member of the Paxtang Lion’s Club.They were both retired employees from the Commonwealth of Pennsylvania. They remained in Harrisburg, PA until November 2018 when they moved to Lewes, DE to be with their daughter and son-in-law. In addition to their parents, Mrs. Shavor was preceded in death by her stepmother, Elisabeth (Ody) Killian and her brother Rudolf Killian. Mr Shavor was also preceded in death by his sister Patricia (Shavor) Basic. Mr. and Mrs. Shavor are survived by their children: Karen Troup (Barry) of Lewes, DE and Todd Shavor of Henderson, NV; their grandchildren: Nicholas Payton (Allison) of Mt. Laurel, NJ, Alexandra Pensiero (Daniel) of Westampton, NJ, Jenna Shavor of Tampa, FL, Sydney Shavor of Henderson, NV, Patrick Hutton of Henderson, NV, Meghan Long (Matthew) of Las Vegas, NV; their great grandchildren: Brandon Payton and Jordan Payton of Mt. Laurel, NJ, and Emilia Pensiero and Morgan Pensiero of Westampton, NJ. They are also survived by their beloved niece, Gabriele Baynham (James) of Mechanicsburg, PA. As a lover of animals, in lieu of flowers, the family suggests contributions to the Brandywine Valley SPCA (bvspca.org)/donate/) in their honor. Final care of Mr. and Mrs. Shavor has been entrusted to Parsell Funeral Homes and Crematorium, Atkins -Lodge Chapel, Lewes, DE. A private Celebration of Life will be held at a later date. Please sign the virtual guestbook located on the tribute page.

Robert Peter Shavor, age 83 of Lewes, DE passed away on Wednesday, November 10, 2021, at Brandywine Senior Living, in Rehoboth Beach, DE surrounded by his wife, son, daughter and son-in-law. He was born on January 25, 1938, in Homestead, PA,... View Obituary & Service Information

The family of Sonja Herta Shavor created this Life Tributes page to make it easy to share your memories.

Send flowers to the Shavor family.