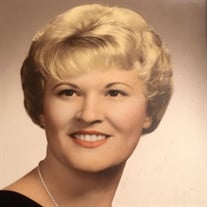 In the late afternoon of a beautiful October day, Ruth Ann Phillips, our beloved sweetheart, mom, grand-ma (G-ma), and friend, passed from this life. She was surrounded by those who loved her. What to say about someone you've known for sixty-five years, a person many thought extraordinary? That she was loveable and gave love. That she loved to laugh- a neighbor called her the funniest woman she's ever known. That she loved teaching and her students. That she hardly ever complained. That she loved to make her family happy. That she could make great dumplings and great crust. That she loved flowers but didn't want to get dirt on her hands. That she would start Christmas shopping so early that presents hidden were forgotten and remained hidden until after Christmas. That she was bright, but never bragged. That she would go out of her way to help people. That she had loads of friends. That she was a really good bridge player. That she would sacrifice her wants for her girls. That she believed everyone equal and thought everyone should have equal opportunities. That she enjoyed her trips to Mexico, Spain, and Quebec as a chaperone. That she loved going to Maine in the fall and eating lobster every day. All those things and so many more are true. She fought the good fight and ran the swift race, and she struggled for the last few months to stay with those she loved, but in the end, her mighty soul was trapped by her failing body, and so it was that she had to leave us. God bless her. Ruth Ann graduated from Laurel (Delaware) High School, Class of 1959, and the University of Delaware, Class of 1963. She also earned a Master's degree from Salisbury University. Her career included twenty years at Laurel High School as a French and English teacher and as a District Writing Advisor. She finished her teaching career at Sussex Technical High School, but worked as a consultant and presenter for the Southern Regional Education Board for two years and after retirement. Throughout her career, she acted as a mentor and inspiration to so many. She was pre-deceased by her parents, Alvin and Libby West, and is survived by her husband, Keith J Phillips of Rehoboth; daughters, Kelly Phillips and spouse, Kimberly Grim, Pam Phillips-Rossi and spouse, Chris Rossi, and Jenny Phillips and fiancé, Larry Dignan; grandchildren: Lindsey, Andrew, Abby, Libby, and Katie; brother, Bill West and sister, Karen West; and former son-in-law, Rob Nestor. Her final wishes were followed so services under the gentle care of Parsell Funeral Homes & Crematorium, Atkins-Lodge Chapel, Lewes, DE, were private. There will be a celebration of life sometime in the future. For those who want to make a donation in her name, we suggest: Food Bank of Delaware, her favorite charity because she hated to think of people, especially kids, being hungry; Delaware Hospice, which was so helpful n her final days; and Beebe Health Home Care, who were absolutely fantastic after she recently broke her arm. Please sign Ruth Ann's online guestbook located on this site.

In the late afternoon of a beautiful October day, Ruth Ann Phillips, our beloved sweetheart, mom, grand-ma (G-ma), and friend, passed from this life. She was surrounded by those who loved her. What to say about someone you've known for sixty-five... View Obituary & Service Information

The family of Ruth Ann Phillips created this Life Tributes page to make it easy to share your memories.

In the late afternoon of a beautiful October day, Ruth Ann Phillips,...

Send flowers to the Phillips family.