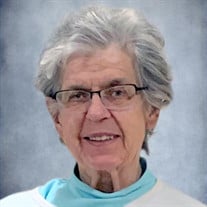 Rosann Helen Lange D’Addurno Mears, 86, passed away after a short period of declining health on Sunday, June 27, 2021, at The Foley Center at Chestnut Ridge, in Blowing Rock NC. She was the daughter of Anna K. Dunhaupt Lange and Otto K. Lange, German immigrants. A “Beebe baby” born on April 28, 1935, Rosann was a lifelong Lewes resident, who moved to NC in February 2021 to be close to family. She was a graduate of Lewes High School and worked for many years, starting when she was in high school, at Beebe Clinic. Rosann and her husband of 34 years, John H. D’Addurno, owned D’Addurno’s Fire & Safety Equipment Company until his death in 1987. She then worked as a realtor for Coldwell Banker in Rehoboth Beach, DE, where she was introduced by a coworker to a widower from Middletown DE, Groome Mears, Jr., to whom she was married for 21 years until his death in 2012. Rosann often talked about how lucky she was to have had two wonderful husbands. She was a former member of the Eastern Star, a lifelong member of the Lewes Presbyterian Church where she was treasurer of the Kelly Class and sang in the Choir, a long time Bible Study Fellowship member, and was active in TOPS. With her first husband, she camped often and was active in the Sussex County Republican Club and Lewes Fire Dept. activities. In addition to her parents and her husbands, Rosann was preceded in death by her son, David H. D’Addurno; her brother, Otto Lange; her stepdaughter, Martha Williams; and her step-grandson, Cameron Sweetman. She is survived by her daughter, Holly J. D’Addurno (Clifford Layman) and their son Clifford “Ford” Layman, all of Blowing Rock NC; her daughter in law, Shelley D’Addurno of Austin TX; her stepchildren: Gretchen Lasswell of Earleville MD and Groome Mears, III (Jill), John Carter Mears (Eileen) and Katharine Sweetman (Doug), all of Townsend DE; 11 step-grandchildren and 18 step-great grandchildren. A funeral service will be held on Wednesday, July 7, 2021, at 11:00 am, at Lewes Presbyterian Church, 133 Kings Highway, Lewes, DE, followed by interment at Bethel Cemetery. A viewing will be held the night prior, Tuesday, July 6, 2021, where friends may call from 6:00PM-8:00PM at Parsell Funeral Homes & Crematorium, Atkins-Lodge Chapel, 16961 Kings Highway, Lewes, DE. In lieu of flowers, donations may be made to Lewes Presbyterian Church, 133 Kings Highway, Lewes, DE 19958 Please sign Rosann's virtual guestbook located on the tribute page.

Rosann Helen Lange D&#8217;Addurno Mears, 86, passed away after a short period of declining health on Sunday, June 27, 2021, at The Foley Center at Chestnut Ridge, in Blowing Rock NC. She was the daughter of Anna K. Dunhaupt Lange and Otto K.... View Obituary & Service Information

The family of Rosann Helen Lange D'Addurno Mears created this Life Tributes page to make it easy to share your memories.

Rosann Helen Lange D’Addurno Mears, 86, passed away after a short...