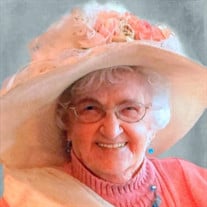 Rosalie Evelyn Roussey, age 92 of Rehoboth Beach, DE, passed away on Thursday, December 2, 2021, at Beebe Hospital, after a prolonged illness. She was born on November 8, 1929, in Baltimore, MD, daughter of the late Alexander and Florence Bush. Mrs. Roussey graduated from Vocation School #98 and from there, went on to a career as a nurse’s aide at St. Agnes hospital. On November 22, 1963, she married the love of her life, George Ashton Roussey, at St. John’s Episcopal Church, in Catonsville, MD. Mrs. Roussey had many different hobbies and interests, including solving all kinds of puzzles and taking trips to different casinos. Above all, she cherished time spent with those she held most dear. Mrs. Roussey was a loving and devoted wife, mother, grandmother, great-grandmother, sister, and friend. She was loved by many and will be deeply missed by all who knew her. In addition to her parents, Mrs. Roussey was preceded in death by her granddaughter, Kimberly Johnson; her sister, Ida Burke; and her brother, John Alexander Bush, Jr. “Buddy”. She is survived by her beloved husband of 58 years, George Ashton Roussey of Rehoboth Beach, DE; her sons: William Johnson (Linda) of Terrytown, LA, Kenneth Roussey (Kimberly) of Pasadena, MD, and Glenn Roussey (Deborah) of Ocean City, MD; her grandchildren: Lori Ziverts, Jennifer Simmons, Joshua Roussey, Jessica Roussey, Kenny Roussey, and Kristopher Roussey; her great-grandchildren: Rhodie Hurley, Mason Quade, Ryan Melito, Olivia Simmons, Emma Simmons, Austin Roussey, Kinsley Roussey, and Reese, Roussey; and her sister, Florence Kehne of Catonsville, MD. A celebration of life will be held at a later date. Please sign the virtual guestbook located on the tribute page.

Rosalie Evelyn Roussey, age 92 of Rehoboth Beach, DE, passed away on Thursday, December 2, 2021, at Beebe Hospital, after a prolonged illness. She was born on November 8, 1929, in Baltimore, MD, daughter of the late Alexander and Florence Bush. Mrs.... View Obituary & Service Information

The family of Rosalie Evelyn Roussey created this Life Tributes page to make it easy to share your memories.

Send flowers to the Roussey family.