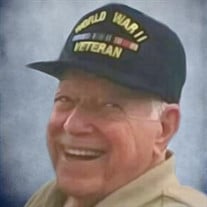 Roger E. Aubrey, age 98 of Lewes, DE, passed away on Tuesday, August 24, 2021, at home surrounded by his loving family. He was born on July 7, 1923, in Holyoke, MA, son of the late Elijah and Regina (Fournier)Aubrey. Roger graduated from Mount Carmel High School in Willimansett, MA in 1940. It was there that he met the love of his life, Jeannette, whom he wed in 1943. Following high school, Roger joined the Civilian Conservation Corps and was drafted into the Army Air Corp, where he served 2 years overseas with the 34th Photo Recon Squadron. During his career he worked at various bases including, Bradley Air Force Base and Westover Air Force Base in Chicopee, MA. He retired in December 1983 as the Deputy Chief of Supply from Dover Air Force Base, after 42 years of civil service. Roger was also the last surviving member of the 300+ men from the 34th Photo Recon Squadron in WWII. His passion was to serve as the historian for his squadron who were part of “The Greatest Generation”. Following his retirement, Roger dedicated the remaining years of his life spending time with family. He and his wife, Jeannette, enjoyed traveling. Roger was the true patriarch of the family. He was a loving and devoted husband, father, grandfather, brother, and dear friend who will be missed by all who knew him. In addition to his parents, Roger was preceded in death by his wife of 73 years, Jeannette L. (Lavallee) Aubrey; his son, James “Jim” Aubrey; his great-grandson, Kayden Jack Benger; his great-great-grandson, Duke Elijah Roberts; his brothers: George, Donald, and Robert Aubrey; and his sisters: Doris (Woodall), Jean (Robert), Lucille (Lemay), and Gertrude Aubrey;. He is survived by his three daughters: Priscilla Nutter of Bothell, WA, Peggy Fraboni and her husband Ray of Elmira, NY and JoAnn Marvel and her husband Tim, of Lewes, DE; his ten grandchildren, thirty-seven great-grandchildren; three great-great-grandchildren; and his sister, Sister Ruth Aubrey of Hamden, CT. A Mass of Christian burial will be held on Wednesday, September 1, 2021, at 11:00 AM at St. Jude the Apostle Catholic Church,152 Tulip Drive, Lewes, DE. A viewing will be held the night prior, Tuesday, August 31st from 6:00 PM – 8:00 PM, at Parsell Funeral Home, 16961 Kings Highway, Lewes, DE 19958. Interment will be private. Due to the ongoing Covid-19 pandemic, masks are required, and social distancing must be observed by any and all persons participating in any aspect of the services. In lieu of flowers, the family requests contributions in Roger’s memory to The Sacred Heart Manor, 261 Benham Street, Hamden, CT 06514. Please sign the virtual guestbook located on the tribute page.

Roger E. Aubrey, age 98 of Lewes, DE, passed away on Tuesday, August 24, 2021, at home surrounded by his loving family. He was born on July 7, 1923, in Holyoke, MA, son of the late Elijah and Regina (Fournier)Aubrey. Roger graduated from Mount... View Obituary & Service Information

The family of Roger E. Aubrey created this Life Tributes page to make it easy to share your memories.

Send flowers to the Aubrey family.