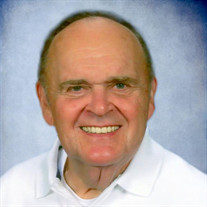 Robert W. Wimmer, age 88 of Lewes, DE, departed this world on December 31, 2021, surrounded by the love of his family. He was born in 1933 in Rahway, NJ, son of the late Henry and Elizabeth Wimmer. Bob was a graduate of St. Peter's High School in New Brunswick, NJ and obtained both his A.B. and M.A. degrees in history from Seton Hall University. He began his teaching career at St. Mary's HS in Elizabeth, NJ and went on to teach for 39 years at Edison HS in Edison, NJ. During his teaching career Bob was an active leader in the ETEA. He was a proud veteran, having honorably served in the US Army from 1955 to 1957. Bob was a volunteer for Meals on Wheels, Literacy Volunteers of America, Delaware Read Aloud Program, and Hosts Program at Shields School in Lewes, DE. As a family man, he supported all his children's endeavors. When Bob wasn't coaching, he was always on the sidelines as a supporter of his children's many events over the years. He was a communicant of St. Helena's Roman Catholic Church in Edison, NJ. After relocating to Lewes, DE for retirement, he became a communicant of St. Peter's Episcopal Church. Bob was a gentle soul who departed this world in the gentlest of ways. Not only was he a gentle man, but he was the family chef, curator of his gardens, voracious reader, crossword puzzle master. Bob once stated, "that music of all kinds can be as healthy to your brain as any other popular brain food medicines, which are continuously being advertised today". Listening to classical music is how he began and ended each day. Bob was known by his family, friends, students, and community as a kind soul. Not much ruffled his feathers, and he always put his family first. As a history teacher of 39 years, Bob created his own acronym, TANSTAAFL, that he always imparted on his students:.There Ain't No Such Thing As A Free Lunch. In addition to his parents, Bob was preceded in death by his siblings: Henry B. Wimmer, Carolyn Hook, and Mary Wimmer. He leaves behind his beloved wife of 50 years, Susan Wimmer; his children: Robert F. WImmer and Diahann Wimmer; and his grandchildren: Abby and Becca Wimmer and Ty, Eli, and Emily Sayball-Wimmer. In his memoir, which he concluded last week, Bob ended by expressing the love he had for his wife. He wrote that Sue had become his best friend, professional colleague, and his “personal clinician.” Bob, a self-less man who treasured his family, was proud of his two children and five grandchildren. Services will be announced at a later date. In lieu of flowers, the family suggests memorial donations to St. Jude Children’s Research Hospital, 501 St. Jude Place, Memphis, TN 98105, or the Food Bank of Delaware, Milford Branch, 1040 Mattlind Way, Milford, DE 19963. Please sign the virtual guestbook located on the tribute page.

Robert W. Wimmer, age 88 of Lewes, DE, departed this world on December 31, 2021, surrounded by the love of his family. He was born in 1933 in Rahway, NJ, son of the late Henry and Elizabeth Wimmer. Bob was a graduate of St. Peter's High School... View Obituary & Service Information

The family of Robert W. Wimmer created this Life Tributes page to make it easy to share your memories.

Send flowers to the Wimmer family.