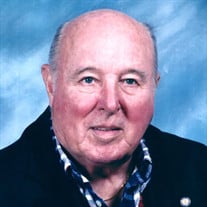 Robert Harry Walsh, age 93 of Milton, DE, passed away peacefully on Friday, September 18, 2020, at his home in Milton, DE. He was born on August 24, 1927 in Brooklyn, NY, son of the late Joseph and Lillian (Grant) Walsh. He enlisted in the U.S. Air Force in 1945 and shortly after met and married the love of his life, Georgina Hamilton on Feb. 24th, 1951 at Fort Bragg, NC. They raised 3 children together. While in the Air Force, he served in the following locations: Japan, Korea, as well as multiple locations throughout the US. He also served through the Korean War. He retired from the Air Force in 1965 in Minnesota. After retirement, he spent 25 years employed at Wakefern Foods. During his life he was very passionate about his family, serving as the past District 6 Commander of the VFW, and serving as the Exalted Ruler in the ELKs. In his spare time, he played darts and loved to bowl. During the holidays he loved to host others and create a community. In addition to his parents, Mr. Walsh was preceded in death by his wife, Georgina; his brother, Albert; and his sister, Henrietta. He is survived by his children: Thomas (Ayn Little) Walsh of Lakewood, NJ, Elizabeth Wade of Lewes, DE, Deborah (Rich) Tyrrell of Neptune, NJ; his grandchildren: Robert (Autumn) Walsh of Neah Bay, WA, Rebecca Tyrrell of Philadelphia, PA, Christopher Wade of Lewes, DE, Bethany Wade of Lewes, DE, Ashley Devlin of Georgia, Katherine (Michael) Callaway of Seaford, DE, Anna (Ricardo) Gonzalez of Dallas, TX, Richard Tyrrell Jr. of Neptune, NJ, and Cynthia Tyrrell of Neptune, NJ: his great-grandchildren: Skye Morris, Jayda Gonzalez, Cambria Shank, Cristian Little, Mia Morris, and Milo Callaway; his special friend, Ola Martin and granddaughter Jamya Smith. Services will be announced at a later date. Please sign the online guestbook located on the tribute page.

Robert Harry Walsh, age 93 of Milton, DE, passed away peacefully on Friday, September 18, 2020, at his home in Milton, DE. He was born on August 24, 1927 in Brooklyn, NY, son of the late Joseph and Lillian (Grant) Walsh. He enlisted in the... View Obituary & Service Information

The family of Robert Harry Walsh created this Life Tributes page to make it easy to share your memories.

Send flowers to the Walsh family.