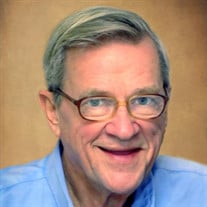 On January 5, 2021, Robert “Bob” A. Waegele, Sr., devoted husband, father, and grandfather, passed away peacefully in his home at the age of 76. Bob was born March 30, 1944 in National Park, NJ. He was born of humble roots and held many jobs early in life - a Mr. Softee ice cream truck driver, a vacuum salesman, a Mullica Hill Volunteer Fire Fighter and many others. In 1963 at the age of 19, Bob began working at the General Motors assembly plant in Newport, DE. He and his family moved to Delaware in 1970. While working full-time at GM, he attended Goldey-Beacom College where he earned his Accounting degree. He served on the UAW representing his colleagues with fairness and dignity. It was there that he cultivated a strong work ethic. He learned to prepare taxes, became an Enrolled Agent and started a tax preparation business, Greenbank Tax Service, on the front porch of his home in Marshallton, DE. Bob retired from GM after 30 years of service in 1993. He never really retired though; he loved to work, so he continued growing his business, eventually relocating to Rehoboth Beach, DE where he opened a new tax office, Shore Tax Service. He loved helping others, and he was always willing to lend a hand to anyone in need. He helped thousands of clients for 40+ years, and he volunteered his services to several charities, most notably the FOP Sussex County Lodge #2, who awarded him with their President’s award in 2020. Bob was not only an accountant; he could do anything, from plumbing and carpentry, to electrical and mechanical work. He was a jack of all trades. He enjoyed working, you rarely found him on the couch in front of the TV (except to watch the Phillies or Notre Dame). If he wasn’t in his office, he was working on projects in his yard or house. He loved his Harley. He was known for his “dad jokes”, he always had one ready for you, he enjoyed his rum and cokes and Monkey Bones at the Purple Parrot, he was a terrible speller, and he had a soft spot for dogs. He enjoyed playing Mexican Train and Hand & Foot and camping with his family and friends at Knoebels and Cherrystone. He loved to travel and was fortunate enough to be able to do so with his wife Joan and their dogs. They traveled to every state, except Hawaii in his RV, including Alaska! (He did, however, fly to Hawaii once!). Bob was a member of the American Legion Stahl Post 30, American Legion Post 28, Delaware Happy Campers, Delmarva Winnies, and the Friday Morning Bikers Breakfast Club. He will be missed by not only his family and friends, but by thousands of clients he has helped over the years. Despite his humble roots, Bob proved the value and rewards of hard work. In doing so, he provided a full life of everlasting memories to his family, who continue to uphold the work ethic he instilled in them. Bob was predeceased by his mother and father, Francis and Clara; his brother, Paul; his sisters: Clara Robb and Frances Waegele; and his dog Sadie. Our hearts are broken, as Bob will be missed dearly by his wife, Joan Waegele; his children, Robert A. Waegele, Jr. (Mary); Leesa Hollenbaugh (Kenny); and his 5 grandchildren. He is also survived by his brother, Joseph; his sisters: Elizabeth Densten and Mabel Huff; and dozens of nieces and nephews. A celebration of life will be held at a later date. In lieu of flowers, the family asks for donations to the Delaware Humane Association or Sussex County FOP Lodge #2. Special thanks to Season’s Hospice for their compassion and care.

The family of Robert Albert Waegele Sr. created this Life Tributes page to make it easy to share your memories.

Send flowers to the Waegele family.