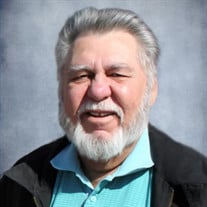 Robert Eugene Ulibarri, age 82 of Bridgeville, DE, passed away on Wednesday, October 13, 2021, at TidalHealth Nanticoke Hospital in Seaford, DE. He was born on April 21, 1939, in Coffeyville, KS, son of the late Seraphim and Louise (Cross) Ulibarri. Bob proudly served in the United States Navy. He was a dedicated employee who worked as a government contractor for decades. Aside from time spent with his beloved wife, Sandi and his family, sons, grandchildren, great-grandchildren, and great-great-grandchildren; Bob's hobbies and love of barbershop quartet kept him active and traveling to competitions all over the country. When he wasn't traveling for singing, he would be found diligently at his computer playing with the stock market or tearing apart and building computers and operating systems. After retirement, Bob took a contractor job overseas in Kuwait for several years maintaining network systems on a military facility. This location allowed a unique opportunity for Bob and his wife Sandi to travel to beautiful places in Europe. He is survived by his beloved wife, Sandra (Edwards) Ulibarri; his sons: Robert "Bobby" Tew of Fort Wayne, IN, Forrest Ulibarri of Corpus Christy, TX, Paul Ulibarri of Smyrna. DE, George Ulibarri of Coffeyville, KS, and Brian Propst, Sr. of Baltimore, MD.; his grandchildren: Amber, Kylee, Danny, Logan, Katie, Veronica, Shawn, Skylar, Tasha, Tyler, Brian, and Brandon; his great-grandchildren: Madison, McKinley, Miley, Liam, Josie, Zachary, Christian, Ada, Blake, Brynn, and Bryce; and his brothers: Don Ulibarri of Phoenix, AZ, and Mike Ulibarri of Pueblo, CO. A Celebration Of Life is planned in November. Memorial contributions may be made in Mr. Ulibarri's memory to Thomas J Shryock, Lodge #223, P.O. Box 759, Hollywood, MD 20636-0758 to be used for the Lodge Refurbishment or to benefit The Shriner Hospital of Philadelphia. Please sign the virtual guestbook located on the tribute page.

Robert Eugene Ulibarri, age 82 of Bridgeville, DE, passed away on Wednesday, October 13, 2021, at TidalHealth Nanticoke Hospital in Seaford, DE. He was born on April 21, 1939, in Coffeyville, KS, son of the late Seraphim and Louise (Cross) Ulibarri.... View Obituary & Service Information

The family of Robert Eugene Ulibarri created this Life Tributes page to make it easy to share your memories.

Send flowers to the Ulibarri family.