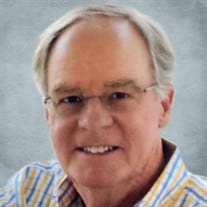 THE LIVE STREAM OF THE SERVICES WILL BE AT THE FOLLOWING SITE- https://www.facebook.com/epworthUMC/live/ If you are having trouble accessing the live stream, please go directly to Epworth Methodist Church's Facebook page to watch the live stream. FLORIST NOTE- PLEASE DELIVER ANY FLORAL TRIBUTES TO THE LEWES FUNERAL HOME ON FRIDAY BY 3 PM. Robert Holloway Moore passed away peacefully Thursday, November 19, 2020, at his home on Silver Lake in Rehoboth Beach. Bob was born at Beebe Hospital on January 18, 1943, son of the late Robert Carlton and Doris (Holloway) Moore. Bob was raised in Rehoboth Beach and graduated from Rehoboth High School before going to the University of North Carolina in Chapel Hill. After graduating, Bob returned to Rehoboth Beach where he joined his father, Carlton, working as a pharmacist and ultimately became co-owner of Moore’s Pharmacy on Rehoboth Avenue. After the pharmacy closed, Bob became founder and senior executive of multiple local real estate development and hotel companies. He built and ran the Oceanus, Bay Resort, and Southwinds motels and transformed the Dinner Bell Inn into the Bellmoor Inn and Spa, an award-winning select registry property. Bob served as a Rehoboth Beach city commissioner, as well as city treasurer. He was a member of the Rehoboth Beach Chamber of Commerce for 22 years, two of which he served as president. Bob was an active member of the Beebe Medical Center Board of Directors for 11 years, where he served on the finance and investment committees. He also served on the Beebe Medical Center Foundation Board for 11 years and served as its vice chair and chair of the finance committee. Bob spent much of the last decade with Dee in the community of Gulf Harbor in Fort Myers, FL, where they became avid boaters. He was made honorary commodore of the Gulf Harbor Yacht Club, an honor he treasured. He was also a founding board member of the AMI Southwest Florida Legacy Foundation. In addition to his parents, Bob was preceded in death by his twin brother, William "Bill". He is survived by his beloved wife of 55 years, Dee Webster; three sons: Chad and his wife Elyse of Rehoboth Beach, Todd and his wife Tiffany of Steamboat Springs, CO, and J.B. and his wife Julie of Rehoboth Beach; his grandchildren: Robert Maxwell, Elizabeth Holloway, Katharine Rose, Richard Mason, Tinsley Webster, Nolan Blake, Marley Holloway, Holden Holloway, Colson James, Lauren Rieley and her husband Mike, and Tyler Bailey; his sister, Carole White of Ponte Vedra Beach, FL; and his sister-in-law, Barbara Moore of Pinehurst, NC. Due to COVID restrictions, a private service will be held Saturday, Nov. 28, at 11 a.m., at Epworth United Methodist Church in Rehoboth Beach. As an expression of sympathy, donations may be made in Bob’s memory to Beebe Medical Foundation, 902 Savannah Road, Lewes, DE 19958 or at www.beebemedicalfoundation.org.

THE LIVE STREAM OF THE SERVICES WILL BE AT THE FOLLOWING SITE- https://www.facebook.com/epworthUMC/live/ If you are having trouble accessing the live stream, please go directly to Epworth Methodist Church's Facebook page to watch the live stream. FLORIST... View Obituary & Service Information

The family of Robert Holloway Moore created this Life Tributes page to make it easy to share your memories.

THE LIVE STREAM OF THE SERVICES WILL BE AT THE FOLLOWING SITE-...

Send flowers to the Moore family.