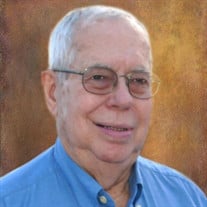 FLORIST NOTE: PLEASE HAVE ALL FLORAL ARRANGEMENTS DELIVERED TO PARSELL FUNERAL HOMES, LEWES, BY 1:00 PM, FRIDAY, MARCH 13, 2020. Robert M. "Mike" McClanahan, age 79 of Lewes, DE, passed away on Thursday, March 5, 2020, at Delaware Hospice Center in Milford. He was born on September 27, 1940 in Lincoln, NE, son of the late Walter R. and Helen L. (Plummer) McClanahan. Mike began his career as a volunteer firefighter in McLean, VA in 1962. He joined the Fairfax Fire Services in 1963 as their 82nd paid firefighter. As the department grew and became the Fairfax County Fire and Rescue Department, he held many different positions, and was responsible for guiding the creation of new programs such as the Hazardous Materials Team and the EMS program. He was the department’s first station Captain at Seven Corners (Station 28), and he was promoted to be the department’s first B-Shift Assistant Chief in 1982. He retired from the department in 1986. Following the line of duty death of his son Timothy, he joined the Lewes Fire Department as an auxiliary member. Mike was an amateur radio operator, holding an Extra Class license. He was a founding member of the Lewes Amateur Radio Society, and he could be found every week on the area’s local “nets” talking to his friends on the air. Mike was a loving and devoted husband, father, grandfather, brother, and friend. He was loved and respected by many and will be deeply missed by all who knew him. In addition to his parents, Mike was preceded in death by his son, Timothy McClanahan in 2016. He is survived by his beloved wife, Rita (McCabe) McClanahan of Lewes, DE; his sons: Sean McClanahan (Pam) of Lewes, DE and Brion McClanahan (Samantha) of Phoenix City, AL; his 10 grandchildren; 2 brothers; and 1 sister. All service are now private due to the Coronavirus concerns. In lieu of flowers, the family requests contributions in Mike's memory to the Lewes VFD Auxiliary, 347 East Savannah Road, Lewes, DE 19958, or Saved Souls Animal Rescue, www.savedsoulsanimalrescue.com. Please sign the online guestbook located on the tribute page.

The family of Robert M. McClanahan created this Life Tributes page to make it easy to share your memories.

FLORIST NOTE: PLEASE HAVE ALL FLORAL ARRANGEMENTS DELIVERED TO...

Send flowers to the McClanahan family.