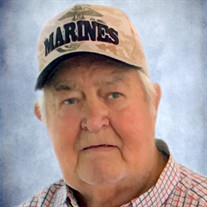 Robert Lee “Bobby Lee” Jefferson, age 78 of Bridgeville, DE, passed away surrounded by his family, on August 5, 2021, at his home. He was born on November 1, 1942, in Concord, DE, son of the late George W. and Margaret Jefferson. Bobby Lee was a graduate of Bridgeville High School. He was a proud veteran, having honorably served in the United States Marine Corps, from 1961 through 1964. Following his service to country, Bobby Lee began a career as a mechanic, retiring from the Dupont Company after many dedicated years. He was an avid outdoorsman, enjoying camping, fishing, and everything nature had to offer. Bobby Lee had many interests and hobbies, including attending auto races and Goodwill shopping. He was a relentless jokester, playing pranks and making people laugh continuously. Bobby Lee was also the president of the L.D. Club. Above all, he cherished time spent with those he held most dear. Bobby Lee was a loving and devoted husband, father, grandfather, brother, and friend. He was loved by many and will be deeply missed by all who knew him. In addition to his parents, Bobby Lee was preceded in death by his son, Ronald “Poochie” Jefferson. He is survived by his beloved wife of 55 years, Juliaanne Jefferson of Bridgeville, DE; his children: Robert L. Jefferson, Jr. (Vicki) of Seaford, DE, Michele Warrington of Milford, DE, and Paul A. Jefferson of Bridgeville, DE; his grandchildren: Kara Pruitt, Chad Perry, Brian Dorey, and Justin Dorey; his great-grandchildren: Kaydence, Aleigha, Kylinn, and Brianna; and his brothers: Billy Jefferson and Richard Jefferson. The family will receive friends on Monday, August 9, 2021, from 6:00 PM to 8:00 PM, and on Tuesday, August 10, 2021, from 10:00 AM to 11:00 AM at Parsell Funeral Homes & Crematorium, Hardesty Chapel, 202 Laws Street, Bridegville, DE. The funeral service will begin at 11:00 AM, on Tuesday, August 10, 2021, and interment will follow the services at Bridgeville Cemetery. Due to the ongoing COVID-19 pandemic, masks are required to be worn by any and all persons participating in any aspect of the services. Please sign Bobby Lee's virtual guestbook located on the tribute page.

The family of Robert Lee Jefferson created this Life Tributes page to make it easy to share your memories.

Send flowers to the Jefferson family.