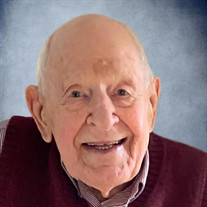 Robert N. Clancy, age 97 of Rehoboth Beach, DE, passed away on Saturday, January 15, 2022, at Beebe Healthcare in Lewes, DE. He was born on December 24, 1924, in The Bronx, NY, son of the late Frank and Louise Clancy. Bob enlisted in the United States Navy Seabees in 1942 while he was still a high school senior. He served 28 months in the South, Central, and North Pacific with the 82nd Naval Construction Battalion, and was honorably discharged in 1946. Following his Navy career, Bob began work with Studebaker Export Corporation in New York City. This was followed by a career with Getty Oil Company from which he retired in 1985 after 33 dedicated years. Bob relocated from Wayne, PA to Rehoboth Beach, DE at this time. During his retirement years he was actively engaged in volunteer work with Meals on Wheels and Casa San Francisco, for 25 years. In recognition of this service to the Wilmington Diocese, Bob was awarded the Benemerenti Medal by Pope Benedict XVI in 2005. In 1987, he was named Volunteer of The Year by The Delaware Department of Health & Social Services. As a member of St. Edmond's Catholic Church in Rehoboth Beach, Bob served as Chairperson of Finance and Administration for 12 years. In recent years he has been volunteering at the Lutheran Church of Our Savior in Rehoboth Beach, mentoring in the ESL Ministry. Bob is also a recipient of The Jefferson Award for Community Service. In addition to his parents, Bob was preceded in death by his wife, Catherine Roche Clancy; his sons: Kevin and Richard; his brothers: Frank and John; and his sister, Doris Boytano. He is survived by his daughters-in-law: April Clancy of Coatesville, PA and Donna Behrens of Darlington, WI; his friend, Rick Rios, of Milford, DE; many loving grandchildren and great-grandchildren; and his many nephews and nieces, all of whom individually held a very special place in his life. Mass of Christian Burial will be held on Friday, February 4, 2022, at 11:00 AM, at St. Edmond Church, 409 King Charles Avenue, Rehoboth Beach, DE, where friends may call beginning at 10:00 AM. Internment will take place On Saturday, February 5, 2022 at 12:00 PM, at Calvary Cemetery, 235 E. Matsonford Road, West Conshohocken, PA. All are invited to join the Mass via live-stream by visiting St. Edmond's YouTube channel at : https://www.youtube.com/channel/UCKBkUj3Am_hZiVsHWAxlgWg. Due to the ongoing Covid-19 pandemic, masks and social distancing are required of all persons attending any aspect of the services. Please sign the virtual guestbook located on the tribute page.

Robert N. Clancy, age 97 of Rehoboth Beach, DE, passed away on Saturday, January 15, 2022, at Beebe Healthcare in Lewes, DE. He was born on December 24, 1924, in The Bronx, NY, son of the late Frank and Louise Clancy. Bob enlisted in the... View Obituary & Service Information

The family of Robert Nicholas Clancy created this Life Tributes page to make it easy to share your memories.

Send flowers to the Clancy family.