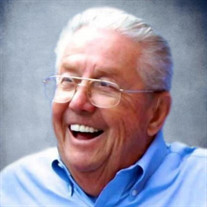 Robert Joseph Chaisson, Sr. passed away peacefully, surrounded by family, on July 28, 2021 in Lewes, DE at the age of 85. He was born on July 3, 1936 in Waltham, MA to Placid J. and Mary C. Chaisson. In between those dates, he lived life to the fullest and loved with all of his heart. He was a man of great faith who believed in people and possibilities. He was lovingly referred to as Bob, Dad, Grampy, Mr. C and Dude. After graduating from St Charles Borromeo High School in Waltham, MA in 1954, Bob served honorably for 3 years in the US Army during the Korean War. He achieved the rank of Sergeant. He graduated from Boston College in 1961. Later, he earned his MBA from American International College. He married Ellen (nee Curley) Chaisson in 1960 at St Charles Borromeo Church in Waltham. Over the years he was employed by Milton Bradley Company, Playskool Inc, and MacMillan Publishing. He was President/CEO of Chaselle, Inc. and New England School Supply Company until his retirement in 1994. Wherever he lived, Cape Cod was his home base. In 1999, Bob and Ellie left the shores of the Chesapeake Bay and their home on Bodkin Point in Pasadena, MD. They moved to Lewes, DE and travelled together, meeting old and new friends along the way. Bob enjoyed boating, fishing, golfing and travelling with his best friend and wife, Ellie, in their RV. He was a parishioner of St. Jude the Apostle Church and an honorary life member of the Knights of Columbus. His favorite thing was spending time with his family and friends playing games, visiting the beach and sharing stories. He was an avid reader and a lifelong learner. His kindness will live on in those he left behind. His generosity of spirit and love for life will be the guiding light for his 14 grandchildren. He is survived by his wife of 61 years, Ellen; his children, Bob Chaisson Jr. (Sue) of Severna Park, MD, Kate Quigley of Dayton, OH, David Chaisson (Lise) of Severna Park, MD and Colleen Magnus (Burke) of Burlington, CT; his grandchildren Keely (Carrie), Robert III (Paul), Savannah (Shawn), Olivia & Pierse Chaisson, Christopher, Ellen (Alec), Alyssa (Nick) & Brian Quigley, Tommy, Alex & Matt Chaisson, Burke & Quinn Magnus; his sisters Mary Chaisson (Joyce) and Carol Chaisson (Corinne) of Waltham, MA; and many loving nieces and nephews. He is predeceased by brothers Placid Chaisson and Paul Chaisson. Mass of Christian Burial will be held on August 14, 2021, at 11:00 AM, at St. Jude the Apostle Church, 152 Tulip Drive, Lewes, DE, where family will receive guests beginning at 10:00 AM. Bob will return to Cape Cod and rest in peace after a service and memorial at Massachusetts National Cemetery, Bourne, MA at a later date. In lieu of flowers, donations can be made in Bob’s name to the charity of your choice. The family would like to thank the nurses, doctors, aids, and all of the staff at Beebe Healthcare for their professional, kind and loving care.

Robert Joseph Chaisson, Sr. passed away peacefully, surrounded by family, on July 28, 2021 in Lewes, DE at the age of 85. He was born on July 3, 1936 in Waltham, MA to Placid J. and Mary C. Chaisson. In between those dates, he lived life to... View Obituary & Service Information

The family of Robert Joseph Chaisson created this Life Tributes page to make it easy to share your memories.

Send flowers to the Chaisson family.