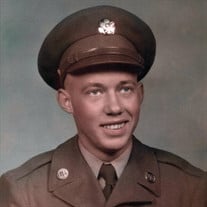 FLORISTS NOTES: PLEASE DELIVER ALL ARRANGEMENTS BY 3:00PM, Wednesday, September 30, 2020 TO OUR BRIDGEVILLE LOCATION Robert S. “Bobby” Short passed away on Thursday, September 24, 2020. He was born on April 25, 1925 son of the late George and Florence (Isaacs) Short. Robert was inducted into the United States Army in 1952 and served in Korea. He grew up working with his father at Short’s Service Station in Bridgeville, DE. If it had a motor, the two of them could make it run! Later in life, Robert worked as a custodian for the Woodbridge School District. Robert was at his happiest though when he was hunting, fishing, or running rabbit dogs with his family and friends. His children, grandchildren, and great grandchildren were the beneficiaries of learning these passions from him and continue them today. Above all, his proudest moments were spent with family cheering them on along the sideline of a game or at a special event. In addition to his parents, Robert was preceded in death by his sister, June; his cousin, Betty Short and his "Aunt Minnie". He is survived by his beloved wife of 73 years, Jean Short; his children: Beverly (Randy), Gail (John), Robin (Carol), and Kim (Brenda); his grandchildren: Jeannie, Holly, Tracy, Frank, Shane, Blaine, Kim and Troy; his 15 great-grandchildren; his 5 great-great- grandchildren; his special cousin, Bonnie Smith and nephew, John Shockley. Although Robert was a man of limited means, he was beyond rich with the love of his family. “Daddy, Pop, and Pop Pop” will be painfully missed by his family and all who knew him. A graveside service with military honors will be held on Thursday, October 1, 2020 at 11:30 AM, at Bridgeville Cemetery, 2 North Laws Street, Bridgeville, DE 19933. A public visitation will be held on Thursday, October 1, 2020 from 10:00 AM to 11:00 AM, at Parsell Funeral Homes and Crematorium, Hardesty Chapel, 202 Laws St., Bridgeville, DE 19933. Due to the ongoing COVID-19 pandemic, social distancing protocols must be observed, and masks must be worn by everyone participating in any aspect of the services. In lieu of flowers, the family suggests contributions in Mr. Short’s memory be sent to Collins Pond Association, P.O. Box 551, Bridgeville, DE 19933. Please sign Robert's online guest book located on the tribute page.

The family of Robert "Bobby" S. Short created this Life Tributes page to make it easy to share your memories.

Send flowers to the Short family.