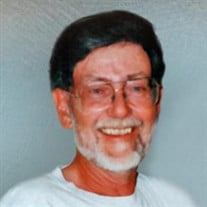 Richard James Ross, age 76 of Rehoboth Beach, DE, passed away peacefully on Monday, June 22, 2021, at Beebe Healthcare in Lewes, DE. He was born on December 16, 1944, in Philadelphia, PA, son of the late Leonard H. and Anna (Cordner) Ross. Richard was raised in Delaware County Pennsylvania. He had one sibling, Leonard "Bud" H., Jr., who was 12 years his senior. Richard had a long and successful career at the Federal Reserve Bank of Philadelphia, where he met the love of his life, Agnes E. Yoos. They married on June 30, 1978 and lived in Secane, PA for many years, until retiring in Rehoboth Beach, DE in 1999. Richard worked as a volunteer at Fort Miles Museum and Historical Area in Cape Henlopen State Park, Lewes, DE, where he went on to become an official Bunker Buster. His volunteer duties were extensive in an ongoing effort to preserve, maintain, and upgrade the museum. Richard, the thoughtful man he was, took great care and pride in the work he did at the museum. He very much enjoyed the work, his surroundings, the people he worked with, and the visitors he interacted with. In addition to his parents, Richard was preceded in death by his beloved wife, Agnes; and his brother, Bud. He leaves behind his stepchildren: Dorothy Alfimow, Theresa Sidorick, Fritz Yoos, Carol Yoos, and Jackie Ross; his step grandchildren: Victoria, Dennis (Jessica), Timothy (Karen), Joanna, and Raven (Dylan); his great-grandchildren: Lillith, Michaelis, Violet, Lucy, Gianna, Gabriella, and Gwenneth; as well as many extended family and friends. A Memorial Service will be held on Tuesday, June 29, 2021, at 11:00 AM, at Parsell Funeral Homes & Crematorium, Atkins-Lodge Chapel, 16961 Kings Highway, Lewes, DE, where friends may visit beginning at 10:00 AM. Entombment will immediately follow the services at Bethel Methodist Columbarium, Savannah Road, Lewes, DE. In lieu of flowers, the family requests contributions in Richard’s memory to Beebe Hospital, 902 Savannah Road, Lewes, DE 19958, or Delaware Hospice, 100 Patriots Way, Milford, DE 19963. Please sign the virtual guestbook located on the tribute page.

The family of Richard James Ross created this Life Tributes page to make it easy to share your memories.

Send flowers to the Ross family.