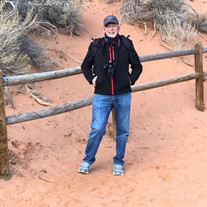 Richard R. Lytle, retired educator dies Richard Risser Lytle, a retired faculty member in the Department of Education at Gallaudet University in Washington, D.C., passed away on November 26, 2021 at his home in Ocean View, Delaware. He was 74 years old. The cause of death was an aggressive form of colon cancer. Dr. Lytle began his career with Gallaudet’s K-12 program, and became a faculty member at Gallaudet in 1986. During his time in Gallaudet’s Department of Education, he served as coordinator of the undergraduate program and as department chair. He also mentored and supervised secondary education social studies majors and coordinated practice teaching placements for undergraduate students in public and private school settings. Dr. Lytle was a staunch advocate for the hiring of qualified deaf people into faculty positions in the department, especially at a time when the department had a majority of hearing faculty members. Dr. Lytle also served as a special assistant to Dr. Robert R. Davila, the university’s ninth president. Richard Godfrey Lytle was born to Gwyeria Pryor and Alexander Lytle on December 3, 1946 in Poole, a coastal town in southern England. His family moved to The Bronx, New York, when he was 11 years old. They moved again several times during his middle school and high school years. Richard started college at Florida State University in Tallahassee, Florida, and completed his bachelor’s degree in history in 1971 at the University of California at San Diego. He subsequently earned his master’s degree in 1977 and his Doctor of Philosophy degree in 1986, both in human development from the University of Maryland at College Park. While on the Gallaudet faculty, Dr. Lytle was awarded a Fulbright Fellowship that focused on touring and learning about China. He quickly recognized the immense educational and personal growth that results from immersing oneself in a different culture. When he returned from his trip, he began organizing China study tours for Gallaudet students and staff. This program continued for many years; the tours themselves always combined learning about Chinese culture with visits and collaborations with Deaf schools and the Deaf community. In one of Dr. Lytle’s most satisfying endeavors, he helped to establish the Bo’Ai School for the Deaf in Jiajiang, a city on the southern shore of the Yangtze River in Jiangxi Province, and to support a deaf Chinese man as its principal. Because of these study tours, Dr. Lytle was able to directly and indirectly influence many deaf Chinese individuals to attend Gallaudet. That influence continues today, years after the study tours ended. Dr. Lytle used his many contacts within the deaf and disabled Chinese communities to continue to support advocacy and community support within the country. In retirement, Dr. Lytle pursued a long-held dream. He founded and served as chief executive officer of Communications Access, a business that focuses on providing opportunities for deaf people in China to secure employment and continued job training with large corporations such as Starbucks, Marriott, Disney, and Apple, among others. This work included setting up live and video relay interpreting services. Because of the global COVID-19 pandemic, he was unable to travel to China the last two years, but the business continued and is expected to continue because of Dr. Lytle’s focus on partnerships and capacity building. In a very real sense, he laid the groundwork for the company’s long-term success. An avid competitive runner, Dr. Lytle completed the Marine Corps, Boston, New York City, and London Marathons. He also organized the 1993 Chesapeake Bay Bridge Run/Walk. He also enjoyed traveling, walking and hiking, especially in Acadia National Park in Maine, and he especially loved the beach. He was an inveterate gardener, golfer, and kayaker. After living in University Park, Maryland, for many years, Dr. Lytle and his wife moved to Ocean View, Delaware in 2019 and became active members of the Bethany Beach area deaf community. Dr. Lytle is survived by his wife of 46 years, Dr. Linda Risser Lytle; his daughters Nerissa Lytle (Charles Franklin); Cassandra Wierzbolowicz (David); and Samantha Williams (Eric); and five grandchildren. Contributions in Dr. Lytle’s memory may be made to the David S. Martin Endowed Fund at Gallaudet University https://gu.live/OOD-Lytle, the Sidney Kimmel Comprehensive Cancer Center https://www.hopkinsmedicine.org/kimmel_cancer_center/washington-dc/ways-to-give.html, or the ALS Organization https://www.als.org/donate. A memorial service will be held at a later time. Please sign the virtual guestbook located on the tribute page.

Richard R. Lytle, retired educator dies Richard Risser Lytle, a retired faculty member in the Department of Education at Gallaudet University in Washington, D.C., passed away on November 26, 2021 at his home in Ocean View, Delaware. He was... View Obituary & Service Information

The family of Richard Risser Lytle created this Life Tributes page to make it easy to share your memories.

Send flowers to the Lytle family.