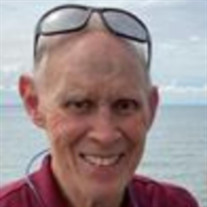 Richard Waltz (nee Gill) Harper, age 77, passed away peacefully on October 2, 2020 after a short illness in Rehoboth Beach, DE. He was born in Portland, OR on July 21, 1943 to Dorothy Doris Brown and Richard Waltz Gill, who was killed in action during World War II. He was raised by Doris, his mother, and Ralph Harper, who adopted him, in Portland, OR and predeceased him. Dick attended James Madison High School, 1961, Willamette College, 1965, Oregon State University, 1968, and received his PhD from MIT in 1973. He was a member of the Phi Delta Theta and Sigma Xi fraternities. Dick spent his entire career as a chemist at Eli Lilly, Indianapolis, retiring after 38 years in 2009 where he held over 25 patents. After retirement, he became an adjunct research professor at IUPUI in Indianapolis. He was a 50-year member of the American Chemical Society, AOPA, and Rotary Club of Big Sky. Among his hobbies were photography, ham radio, flying, skiing, reading, listening to classical music, U2, Pink Floyd, and cooking. He will be remembered by all who knew him for his kindness, patience, gentleness, smile, generous heart, his dry sense of humor, and “Dad” jokes. Maude is especially grateful for helping her to grow into a better person. His very special companions were his dogs: Teddy Bear, Skippy, Kallie, Zoe, Mittie, and Farley. He is survived by his wife, Maude E. Glore of Rehoboth Beach, DE and Big Sky, MT. He was a loving and influential father to his six children: Jennifer (Jose), Jill (Blaine), Jonathan; his children by his former wife Susan Harper: Robert (Jennifer), Benjamin (Melissa), and William (Candice); his stepchildren by Maude Glore. He also has 11 amazing grandchildren who called him “Grampy:” Isabel, Lucia, Gunnar, Charles, Emma, Hixon, Logan, Henry, Tyler, Caroline, Charles. He is also survived by his sister, Teri Moore of Portland OR. A memorial service will be held privately at a later date. In lieu of flowers, any memorial donations should be made to the ASPCA in his memory at https://secure.aspca.org/team/RichardWaltzHarper Please sign the online guestbook located on the tribute page.

Richard Waltz (nee Gill) Harper, age 77, passed away peacefully on October 2, 2020 after a short illness in Rehoboth Beach, DE. He was born in Portland, OR on July 21, 1943 to Dorothy Doris Brown and Richard Waltz Gill, who was killed in action... View Obituary & Service Information

The family of Richard Waltz Harper created this Life Tributes page to make it easy to share your memories.

Send flowers to the Harper family.