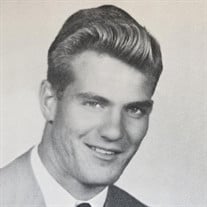 Richard “Dick” “PoppaDu” DuLaney, age 88, passed away on Monday, December 14, 2020 following a long battle with Alzheimer’s Disease. He was surrounded by family at his home in Bethany Beach, DE. He was born on October 22, 1932 in Washington, DC, son of the late George and Mary (Schlegel) DuLaney. He attended St. John’s College High School and was the starting right tackle on the football team that won the Washington Catholic Athletic Conference championship his senior year. Following high school, he attended Mt. Saint Mary’s University and was subsequently drafted into the Army. After his stint in the military, Richard embarked on a long career as a cartographer, starting at the Census Bureau in Suitland, MD and moving on to NOAA in both Silver Spring and Rockville. During this time, Richard met, fell in love with, and eventually married Anne Dennin on July 28, 1956. They were together for 64 years and raised 10 children. Richard and Anne loved the beach. They spent countless vacations at Bethany Beach, DE with their ever-growing family, and following Richard’s retirement, they sold their home in Upper Marlboro, MD and moved to Bethany Beach permanently. Their home in the Salt Pond, completed in 1994, quickly became the hub of their family’s vacation activity, and every grandchild in their large family has fond memories of days on the beach with Nannan and PoppaDu. Richard was a devout Catholic who attended the annual March for Life in Washington, DC for many years. He was a member of the Knights of Columbus and he also enjoyed spending time with the Men’s Club of St. Ann’s Parish in Bethany Beach. Richard absolutely loved football and closely followed the Notre Dame Fighting Irish and the Washington Redskins. He coached football at Holy Family in Hillcrest Heights, MD. He often reminisced about his playing days and he passed his passion for the game on to his sons. He was also a train enthusiast. The large room above the garage in his home was affectionately known as “The Train Room” thanks to the elaborate model train display he created over the years. Richard’s passion for sweets was also well known, specifically cream filled donuts and ice cream, his morning and nightly rituals that he loved to share with others. If you were visiting PoppaDu, you knew that when 8pm rolled around, it was “ice cream time”! You also knew that just about any time was “picture time”! Richard was an avid photographer who loved his family and there was no occasion that he deemed too insignificant to photograph. If you ask one of his grandkids to describe a visit to Nannan and PoppaDu’s, every one of them will mention going to the beach, watching the trains, eating ice cream and getting their picture taken... a lot! Richard was so appreciative of the close relationships that he had with family and friends. He was a kind, compassionate and caring man. The outpouring of support from friends and neighbors during Richard’s battle with Alzheimer’s has been extraordinary, and the social media posts from his adult grandchildren following his passing have sparked a lot of smiles and a lot of tears, and serve as a wonderful testament to the life he led and to the example he set for his family. In addition to his parents, Richard was preceded in death by his twin brothers: Paul and George DuLaney; his sister, Margaret Biro, and his granddaughter, Melanie Ridgely. Richard is survived by his wife, Anne T. DuLaney of Bethany Beach, DE, as well as 10 children, 24 grandchildren, 19 great-grandchildren, and his constant companion and lapdog Carlie Sue; Cathi (Dave Wingate) of Silverthorne, CO and children Nikki (Neal Fritzler - Jackson) and Brian (Lindsay - Brooklyn, Miles and Weston); Danny (Betty) of Annapolis, MD and children Erik (Jessica -Trace) and Denny; Debbie (Carl Chambers) of Coatesville, IN and children Jessica (Josh Goodpastor - Griffin, Mason and Reese) and Cody; Patti (Jimi Magnole) of Cooper City, FL; Joan (Jim Ketchum) of Columbia, MD and children Matt (Bryn) and Darren; Beth (Joe Brinton) of Betterton, MD and children Jason (Hanna, Caleb, and Bailey Rae) and Samantha (Danny Walker - Londyn and Declan); Tim (Jennifer) of Stevensville, MD and children Paige (Reece Lauffer), Nathan and Natalie; Ruth (Will Ashbrook) of Corpus Christie, TX and children Travis (Kanyon, Brantley, Jagger and Jax), Melanie (Kylie and Carter), Aaron, Marissa, and Brenna; Anne Marie DuLaney of Pasadena, MD and children Jordan (Katrina) and Danielle; and Chrissy (Scott Dillard) of Kershaw, SC and children Kirk Jr., Jocelyn, Devin, Bryce, and Hailey. Richard “PoppaDu” was a loving and devoted husband, father, and grandfather. He will be greatly missed by all. A celebration of his life is planned for 2021, once the threat of COVID-19 has passed. In lieu of flowers, the family is requesting donations be made to the Alzheimer’s Association. (). Richard’s family would like to say a special thank you to his neurologist, Dr. Lawrence Kemp who has been with them for this entire journey. His wisdom, compassion and tough love have been invaluable. Please sign his online guest book at this site.

The family of Richard "Dick" C. DuLaney created this Life Tributes page to make it easy to share your memories.

Send flowers to the DuLaney family.