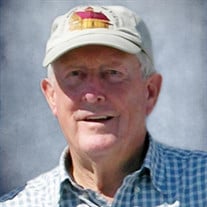 Richard D. Tikiob, Sr. (aka Dad, Deedad, the Colonel, Dickie Dick, Uncle Dick) passed away on December 1st with age being the cause of death. He was born in McKeesport, PA and was the son of the late Julius Edward Tikiob and Helen Pitcher Tikiob. He was preceded in death by his wife Ruth Ann Draper Tikiob and daughter Leslie Tikiob Ballinger. Dick received his Bachelors degree at the University of Delaware and was a member of the ROTC program. He spent 23 years serving in the U.S. Army and retired as a Lt. Colonel. After retiring, Dick had a successful career in real estate working for Harry Shaud Realtors and Coldwell Bankers. Dick retired from real estate in the late 90’s. Dick was deeply devoted to his family and was an excellent provider. His generous support for charities was a testament to his character. He was also a devoted Episcopalian and belonged to All Saints Church where he served as an usher for many years. Dick was known for his sense of humor, his passion for life and his love of family and friends. Dick, along with his wife, were known as the life of the party. His competitive spirit was always present when he played horseshoes, ping pong, bridge, darts, and golf. Richard Jr. and family continued the tradition of taking their Dad his Whitman’s chocolates, which were his favorite, and he always hid them so he wouldn’t have to share them with anyone. Since 2013 Mr. Tikiob was fortunate to have Griswold caregivers who became part of the family and cared for him until he moved to Brandywine in 2019. The Tikiob family will always be thankful for his 24-7 Griswold pals, Patty, Marie and Marianne. After moving to Brandywine Seaside in 2019, he kept the staff in Reflections on their toes making sure he didn’t get into any mischief. He is survived by his daughter Sue Tikiob Carlson, (husband Richard Carlson) their son Ryan Carlson; son Richard D. Tikiob Jr. (wife Leana Tikiob), their children Aaron Grozdev Tikiob and Natalia Ann Tikiob; son David E. Tikiob (wife Cindy Tikiob) their sons Matthew and William, grandson Eric Tikiob Biase; his sister Eleanor Tikiob Vansant and the extended families of the Drapers, Morellis and Vansants. All Services at the funeral home will be private for the family. However, the service may be viewed via live streaming link, by visiting on Tuesday December 14, 2021 at 11 AM to the following link: http://www.parsellfuneralhomes.com/obituaries/permalink/10268942/LTWebcast The family has suggested contributions to Seasons Hospice at https://seasonsfoundation.org/donate Please sign the online guestbook at this site.

Richard D. Tikiob, Sr. (aka Dad, Deedad, the Colonel, Dickie Dick, Uncle Dick) passed away on December 1st with age being the cause of death. He was born in McKeesport, PA and was the son of the late Julius Edward Tikiob and Helen Pitcher Tikiob.... View Obituary & Service Information

The family of Richard D. Tikiob "Dick" LTC, USARMY ret. created this Life Tributes page to make it easy to share your memories.