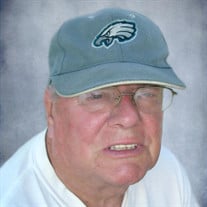 Ramon “Fuzzy” Dean Leindecker, Sr., age 84, of Rehoboth Beach, DE passed away on Monday, August 3, 2020, at Resorts at Chester River Manor, in Chestertown, MD. He was born on May 2, 1936 in Northampton, PA, son of the late Charles and Helen (Lapp) Leindecker. Fuzzy graduated from Northampton High School in Northampton, PA, Class of 1955, where he was quite the athlete. He participated in many sports but was known for pole vaulting as well as his medals in track & field. He did swimming exhibitions, and once dressed in a clown costume, did tricks off the diving board to entertain the townspeople at the opening year of the Northampton municipal swimming pool. After high school, he played baseball in a local league. Fuzzy was employed by General Electric in Allentown, PA. During these years, as a union steward, he hosted many clam bakes at his family summer home and was active in the church dance committee and scouting. In his 50’s, he moved to Rehoboth Beach, DE where he assumed a coastal lifestyle of fishing, clamming, boating, picking wild asparagus and daily drives to see all the wildlife. In addition to his parents, Fuzzy is preceded in death by his brother, Rodger W. Leindecker in 1942. He is survived by his three children: Ramon Dean Leindecker, Jr., Scott Charles Leindecker, and Maria Lynn Leindecker and her fiancé, Howard T. DeRemer, all of Northampton; and one granddaughter, Megan Elizabeth Hildebrand of Front Royal, VA. All services are private. Please sign Mr. Leindecker's online guest book located on this site.

The family of Ramon "Fuzzy" Dean Leindecker Sr. created this Life Tributes page to make it easy to share your memories.

Send flowers to the Leindecker family.