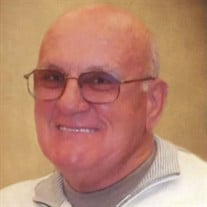 Ralph Gerald Lewis, age 82, of Frankford, DE, passed away peacefully surrounded by his family on Wednesday, March 3, 2021 at Beebe Healthcare following a hard-fought battle with cancer. He was born in Millville, DE, on August 12, 1938 son of the late Ralph Elijah and Charlotte Derrickson Lewis Bratten. During his adolescent years, his Dad remarried Daisy West Lewis who became his beloved stepmother. For over 30 years, Mr. Lewis worked as an insurance agent. He started working in the life and health field, and then transitioned to property and casualty in his later career. Following retirement, he worked for many years as a funeral home assistant for Parsell Funeral Homes. Gerald had a strong work ethic and was meticulous when it came to completing a project. His yard, his cars-especially his Black F 150 and his clothing attire had to be always kept in immaculate condition. Not only did he maintain his cars well, he kept extremely fit by working out in his own gym. He was a fan of Stock Car Racing and could often be seen with his wife at the Georgetown Speedway or the Delaware International Speedway. He is survived by his wife of 62 years, Janice Marie Gray Lewis; two daughters, Donna Rae Robinson (Clayton E.) of Salisbury, MD and Diane Lewis Timmons of Salisbury, MD; a very close friend whom he considered like an adopted son, Joe Perna (April) of Harrington, DE; three sisters, Yvonne Cropper of Selbyville, DE, Janet McCabe (Ray) of Fenwick Island and Florida, and Carol Mitchell of Salisbury, MD; two half sisters, Linda B. Hudson of Easley, South Carolina and Deborah Durkee (Will) of Seaford, DE; one step brother Dennis Workman (Cheryl) of Frankford, DE; three grandchildren, Aaron M. Robinson (Dawn Elizabeth) of Georgetown, DE, Stacey Hutson (Thomas) of Dagsboro, DE and Zachry J. Brinker (Karen) of Ellicott City, Maryland; three great grandchildren, Grace Kennedy Robinson, Rebecca Avery Robinson and Reagan Emily Hutson. He was also predeceased by his beloved dog "DUTCHESS" whom he deeply loved. Funeral Services will be held on Thursday, March 11, 2021, at 12:00 noon at The River- A Wesleyan Church, 35175 Roxana Road, Frankford, DE, where friends may call beginning at 10 am at the church. Burial will follow the services at Roxana Cemetery. The services will also be live streamed from the church at https://youtube.com/channel/UCEp_H7UQgJxiNdPPUNpVNUg Due to the ongoing COVID -19 pandemic, social distancing protocols must be observed and masks must be worn by everyone in attendance and/or participating in any aspect of the service. In lieu of flowers, contributions are suggested to the Tunnel Cancer Center or the South Coastal Cancer Center, In Memory of Ralph Gerald Lewis, C/O Beebe Medical Foundation, 902 Savannah Road, Lewes, DE 19958. Please sign his virtual guest book at this site.

Ralph Gerald Lewis, age 82, of Frankford, DE, passed away peacefully surrounded by his family on Wednesday, March 3, 2021 at Beebe Healthcare following a hard-fought battle with cancer. He was born in Millville, DE, on August 12, 1938 son of... View Obituary & Service Information

The family of Ralph Gerald Lewis created this Life Tributes page to make it easy to share your memories.

Send flowers to the Lewis family.