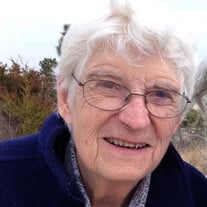 Phyllis M. Frick, age 93, died on Wednesday, August 19, 2020 at Delaware Hospice Center in Milford, DE, following a fall from which she did not recover. Born in 1927 while her parents were graduate students at the University of Illinois, she was raised in Decatur, Illinois, “the soybean capital of the world.” Phyllis excelled in school, skipping a grade, and eventually earning a degree from Carleton College in Northfield, Minnesota. It was there she met her future husband, George, a veteran of World War II, who was a student at St. Olaf College, on a blind date. Her romance with George took her to Santa Ana, California to work as a Field Director with the Girl Scouts after college, while George began his graduate studies at the University of California, Berkeley. Phyllis and George returned to Decatur and were married in 1950. George’s first position was as a junior high school teacher in rural Illinois, but with the encouragement of his in-laws, he decided to pursue his Ph.D. at the University of Illinois. During this time in the Midwest, they started their family which would grow to include three children. George’s career as an historian took the family first to Rutgers University in New Jersey, and then in 1960, they moved to Newark, where he began teaching at the University of Delaware. Phyllis worked in various volunteer and paid positions throughout her adult life including as a volunteer with seniors in New Jersey, a travel coordinator for the Winterim program, and a proofreader for the International Reading Association. An active member of the community, she participated in book group, soup group, bridge group, AAUW, among other interests. She enjoyed gourmet cooking, knitting, sewing, upholstering, and traveling. An unabashed anglophile, she had the chance to live in England several times and enjoyed the exploration of areas off the beaten path-especially if they were accessible by one of the London bus lines. George and Phyllis moved to Lewes in 1988 to begin their retirement together, but George died suddenly in 1991. Phyllis continued to live in Lewes for the rest of her life. In Lewes, Phyllis volunteered for the Historical Society at Shipcarpenter Square and as an AARP tax preparer. She also attended classes at the Osher Institute for Lifelong Learning. She was a skilled bridge player, up until her final years. Phyllis enjoyed harmonizing as an alto throughout her life, and most recently as a member of St. Peter’s Episcopal Church choir. Some of her favorite things about Lewes were the Lewes Dairy store, Cape Henlopen State Park, and Kings Ice Cream. Phyllis is preceded in death by her parents, and brother, along with her husband of 41 years, George. She is survived by her children, Margaret, of Arlington, Virginia; Karl, of Seaford, Delaware; and Elizabeth, of Rockville, Maryland. She is also survived by six grandchildren and six great-grandchildren. A memorial service will be planned after the pandemic has subsided. Memorial donations may be made to the Lewes Historical Society, 110 Shipcarpenter Street, Lewes, DE 19958; Delaware Hospice, 100 Patriots Way, Milford, DE 19963; or the local food bank of your choice. Please sign Phyllis' online guestbook located on this site.

Phyllis M. Frick, age 93, died on Wednesday, August 19, 2020 at Delaware Hospice Center in Milford, DE, following a fall from which she did not recover. Born in 1927 while her parents were graduate students at the University of Illinois, she... View Obituary & Service Information

The family of Phyllis M. Frick created this Life Tributes page to make it easy to share your memories.

Send flowers to the Frick family.