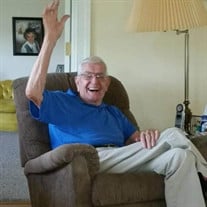 Phillip I. Cunningham (Big Phil), age 97 of Lewes, DE passed away peacefully at his home on November 15, 2021. He was born August 22, 1924, in Bloomington, IN, son of the late Cyrus Irvan and Anise Louise Bridwell Cunningham. In addition to his parents, he was preceded in death by his wife of 65 years, Sarah Elizabeth Carpenter Cunningham; daughters, Susan Kidd and Janice Cunningham; and two sisters Ellen Piccariello and Margaret Jane Cornwell as well as grandson, Gerald Brown, Jr. Mr. Cunningham had worked for over 20 years with the Delaware Department of Transportation before retiring as a Traffic Supervisor. In his early years, life was a struggle as his father passed when he was just 11 years old, thus making him the head of the household. He joined the United States Coast Guard during WW II which brought him to Lewes where he met Sarah. He ran the family poultry farm and continued for many years delivering eggs door to door in Lewes from their poultry houses. His devotion to caring for his family would find him also working numerous jobs including, installing television antennas in the area for Bill Soots TV shop, cutting grass at Old Landing Golf Course, working for the Town of Lewes as an electrician, and working at the former Vessels Lumber Yard, typically 2 or 3 jobs at a time. However, that did not deter him from staying involved with his large family and community. He co-founded the Lewes Little League program. He and 3 other Dad’s coached the first 4 teams. He coached the Braves and treated every boy on his team as his own. His first love, like many Indiana boys was basketball, he was the center for his Coast Guard team during his service years. Another sport he was well known for was softball, he was a pitcher for the Lou Ianire’s town team, he played at a competitive level until age 56. Later in life he took up golf and played frequently at the Old Landing Golf Club with his family and friends. He built his own clubs as well as clubs for many others. Following Indiana University and their sports teams rounded out his sports endeavors. He loved to talk I.U. sports with his brother Hubert. He is survived by his beloved brother Hubert, of Bloomington, Indiana, his children, Michael Cunningham (Bev) Lewes, DE; Rodney Cunningham (Carolyn) of Boca Raton, Florida, Paul Cunningham (Doris) of Lewes, DE, Sally Hrycyk of Lewes, DE whom the family would like to thank for all her loving care and support of their father during the past few years, Jack Cunningham (Cindy) Lewes, DE, Carol Brown (Gerald) Milford, DE; Son-in-law, Rick Kidd; 19 grandchildren who affectionately called him Popeye, 44 great-grandchildren and one great-great-grand daughter. Funeral Services will be held on Saturday, November 20, 2021, 2:30 p.m. at the Lewes Presbyterian Church, 133 Kings Highway, Lewes, DE where friends may visit at the church starting at 1:00 p.m. prior to the services. Burial will be in the adjoining church yard. The service may also be viewed via live stream by visiting https://youtube.com/c/LewesPresbyterian Memorial contributions may be made to Delaware Hospice, 100 Patriots Way, Milford, DE 19963 or to the Lewes Presbyterian Church, 133 Kings Highway, Lewes, DE 19958. Please sign the online guest book at this site. Due to the ongoing Covid Pandemic it is highly recommended that social distancing and the wearing of a facemask be considered.

Phillip I. Cunningham (Big Phil), age 97 of Lewes, DE passed away peacefully at his home on November 15, 2021. He was born August 22, 1924, in Bloomington, IN, son of the late Cyrus Irvan and Anise Louise Bridwell Cunningham. In addition to... View Obituary & Service Information

The family of Phillip I. Cunningham created this Life Tributes page to make it easy to share your memories.

Send flowers to the Cunningham family.