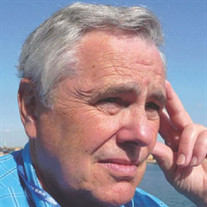 Phil Wescott of Lewes, Delaware died on February 9th at his home, surrounded by his family. His family and his career were both important to Phil. So were his aesthetic interests and his spiritual growth and development. During his lifetime he pursued several different careers and interests and was known as a true people person. Born in Pittsburgh, Pennsylvania on October 28, 1943, he was the fourth child of Louis Sebastian Wescott and Genevieve Flynn Wescott, both of Olean, New York. Phil was a graduate of Kiskiminetas Springs School [“Kiski”] in Saltsburg, Pennsylvania, as well as of Wabash College, Indiana University [Bloomington], and the University of Delaware. He married Carol Hocker of Evansville, Indiana in 1966 and they were subsequently blessed with three children. After military service during the Vietnam War, he pursued a career in marketing and communications, primarily in the healthcare industry. He was an executive at Bristol-Myers Squibb Company and at the Christiana Care Health System, and also organized and operated several successful small businesses. Phil was a gifted communicator, in diverse formats. He worked for leading Advertising and Public Relations agencies in New York and Chicago, including Saatchi & Saatchi and Burson-Marsteller. He enjoyed art, both as a practitioner and as an observer and collector. He also read and wrote non-fiction and poetry. After helping establish and then branding Delaware’s Christiana Care Health System, Phil joined the communication faculty at the University of Delaware until his retirement in 2008. Throughout his career, he enjoyed mentoring young talent, and he was repeatedly recognized as an Outstanding Advisor to UD students and campus organizations. He retired from the UD faculty and subsequently enrolled in his third Master’s degree program there. He was also active as a Board member of numerous professional and community organizations, including the Public Relations Society of America, the Delaware Community Foundation, the American Marketing Association, the Girl Scouts of American Chesapeake Bay Council, the Rehoboth Art League, and others; he also helped organize and open the Charter School of Wilmington, Delaware’s first Charter school. After Carol's death in November 2006, Phil met Judith Wells Brunner of Wilmington, and they enjoyed many happy years together, traveling and spending time at Rehoboth Beach. He often said that his life was greatly enriched by Judy, who also encouraged his creative pursuits. They lived at the Bay Crossing community in Lewes, Delaware in recent years. In addition to Judy and his three children, Phil is survived by nine grandchildren. His children are Kimberly Gee [husband Bryan] of La Grange, IL, Kristen Schneider [husband Bruno] of Paris, France, and Mike [wife Andrea] of San Carlos, CA. Grandchildren include Abby, Maddie, and Caroline Gee, Scarlett, Harlowe, and Brooke Schneider, and Josie, Charlie, and Sean Wescott. His brother, Bill Wescott, of Richmond, VA also survives, as do seven nieces and nephews. Judy’s sisters, their husbands, her brother and his wife and all their children and grandchildren have loved Phil for many years. A Mass of Christian Burial will be celebrated at 10:30 AM on Tuesday, February 18th, 2020 at St. Joseph on the Brandywine Roman Catholic Church, 10 Old Church Road, Greenville, Delaware, where friends may visit beginning at 9:30 AM. Burial will immediately follow at St. Joseph on the Brandywine Cemetery. Arrangements are being handled by Parsell Funeral Homes & Crematorium, Atkins-Lodge Chapel, Lewes, Delaware. In lieu of flowers, contributions may be made in Phil's memory to the Tunnell Cancer Center in Rehoboth Beach, Delaware or to the Heart and Vascular Center at Christiana Care Health System in Newark, Delaware, in memory of Carol Wescott. Please sign the online guestbook located on the tribute page.

Phil Wescott of Lewes, Delaware died on February 9th at his home, surrounded by his family. His family and his career were both important to Phil. So were his aesthetic interests and his spiritual growth and development. During his lifetime... View Obituary & Service Information

The family of Philip Charles Wescott created this Life Tributes page to make it easy to share your memories.

Phil Wescott of Lewes, Delaware died on February 9th at his home,...

Send flowers to the Wescott family.