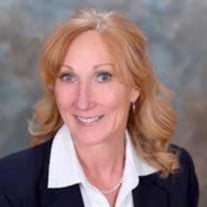 FLORIST NOTE: PLEASE DELIVER ALL ARRANGEMENTS BY 12PM TUESDAY, OCTOBER 6, 2020 TO OUR LEWES LOCATION. Peggy Marshall Thomas, age 59 of Lewes, DE, passed away on Tuesday, September 29, surrounded by her loving family, after a brief, but intense battle against cancer. She was born on October 26, 1960 in Akron, OH, daughter of Richard Kalman and the late Marilyn (Woody) Jackson. Peggy was an amazing mom, lawyer, and photographer, who always gave her best to whatever she undertook. She graduated from the University of California, Irvine and earned her Juris Doctor at Villanova University School of Law. She received a Master’s in Corporate Law and Finance from Widener University School of Law. Beginning in 1986, she served as a Deputy Attorney General in the Criminal Division of the Delaware Department of Justice. Peggy served as Chief Prosecutor in Sussex County from 2013 until her retirement in 2016, the first woman attorney to serve 30 years in the Department of Justice. Following her retirement, she worked as legal counsel to the Republican caucus of the State House of Representatives and served as Vice Chair of the Executive Committee of the Sussex County Region of the Delaware Republican Party. Peggy was a successful and accomplished prosecutor. She earned the respect of her colleagues and the trust of law enforcement and the courts as well as of the victims, whose cases she fairly and effectively prosecuted. Peggy was as tenacious in the gym as well as in the courtroom and sometimes worked out twice in a day. She was engaged in the business and policies of the State and read the Wall Street Journal every day. She was a role model for young students through her participation in the High School Mock Trial competition, and regularly hosted students from Sussex Technical High School in the Sussex office of the Department of Justice as interns. Peggy was also a photography enthusiast, taking impressive pictures of natural scenes and wildlife, especially birds. She and Craig would often bike through local parks and look to capture a special glimpse into nature. Of all Peggy’s accomplishments, her real joy was her family. She relished celebrating her children’s successes and sharing her many “motherisms”. Peggy had an infectious laugh that could bring a smile to everyone’s face at family gatherings. She was a joy to them and will be dearly missed. In addition to her mother, Peggy was preceded in death by her sister, Jeni Mading. She is survived by her husband, Craig Thomas; her daughters: Allison Hageman and Lindsay Hageman (Sherri); her son, Kevin Hageman; her stepsons: Michael Thomas and John Thomas; her father, Richard Kalman (Branka); her stepfather, Harold Jackson; her brother, Rick Kalman (Pam); her sisters: Melody Perez (Joe) and Deborah Thomas (Jonathan); her grandson, Landon Hageman; and her beloved cat, Leo. A funeral service will be held on Wednesday, October 7, 2020 at 11:00 AM, at The Crossing, 15183 Coastal Highway, Milton, DE, where friends may call beginning at 10:00 AM. An additional viewing will be held the night prior, Tuesday, October 6, 2020 from 5:00 PM until 7:00 PM at Parsell Funeral Homes and Crematorium, Atkins-Lodge Chapel. 16961 Kings Highway, Lewes, DE. Interment will follow the funeral services at St. Peter's Cemetery, Pilottown Road, Lewes, DE. Due to the ongoing COVID-19 pandemic, social distancing protocols must be observed and masks must be worn by everyone participating in any aspect of the services. Please sign the online guestbook located on the tribute page.

FLORIST NOTE: PLEASE DELIVER ALL ARRANGEMENTS BY 12PM TUESDAY, OCTOBER 6, 2020 TO OUR LEWES LOCATION. Peggy Marshall Thomas, age 59 of Lewes, DE, passed away on Tuesday, September 29, surrounded by her loving family, after a brief, but intense... View Obituary & Service Information

The family of Peggy Marshall Thomas created this Life Tributes page to make it easy to share your memories.

Send flowers to the Thomas family.