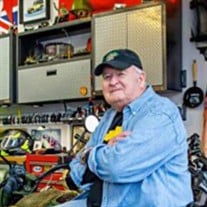 Paul Wayne Yeager, age 73 of Lewes, DE, passed away on Thursday, February 11, 2021, at Beebe Healthcare. He was born on February 22, 1947 in Pittsburgh, PA, son of the late Howard V. and Lucille M. (Powell) Yeager. Paul received a B.A. in Writing and an M.Ed. in Vision Studies, both from the University of Pittsburgh. He was awarded a graduate assistantship at Duquesne University. Paul was also a certified orientation and mobility specialist, with clients ranging in age from birth to the elderly. Paul had many achievements during his lifetime that included twice finishing the New York Marathon. He earned a 3rd Degree Black Belt in Tae Kwon Do and Hapkido. He participated in triathlons with his sons. Mr. Yeager also co-authored several federally- funded programs to better serve children with visual conditions. Paul was an avid collector and enjoyed researching, acquiring, and maintaining various vehicles. He participated in local reenactments. Paul had a passion for history and greatly enjoyed spending time with his two grandchildren, Audrey and Lucas. He was also honored to have been a kidney donor. In addition to his parents, Paul was predeceased by his brother, Rodger Yeager. He is survived by his wife of 50 years, Emily; his sons: Seth, of Wilmington, DE and Lewes, DE and Douglas (Maria) of Dallas, PA; his grandchildren: Audrey and Lucas; his brother Howard L. Yeager (Marcia) of Victoria, BC; his sisters-in-law: Jan, Marcia, Merryl, Jackie, and Carolyn; and his brothers-in-law: Marc, Matt, and Bill. Services will be private. The family suggests donations in Mr. Yeager's memory be made to Northeast Sight Services, 1825 Wyoming Avenue, Exeter, PA 18643. Please sign the online guest book located on the tribute page.

Paul Wayne Yeager, age 73 of Lewes, DE, passed away on Thursday, February 11, 2021, at Beebe Healthcare. He was born on February 22, 1947 in Pittsburgh, PA, son of the late Howard V. and Lucille M. (Powell) Yeager. Paul received a B.A. in... View Obituary & Service Information

The family of Paul W. Yeager created this Life Tributes page to make it easy to share your memories.

Send flowers to the Yeager family.