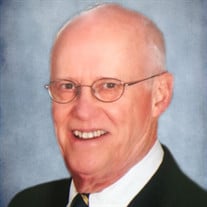 Patrick John Brill, of Rehoboth Beach, DE and formerly of Bethesda, MD, passed away on June 16, 2021, at the age of 89. Patrick was born on January 9, 1932, in Wilmington, DE, son of the late John Lewis Brill and Martha Fenn Brill. Patrick was raised at Old Peach Farm in Newark, DE, attending Tower Hill School and graduating from Holderness School in New Hampshire. He further pursued his education and earned a B.A. degree from The University of Virginia, where he was also a member of the Sigma Phi Fraternity. Patrick served for four years in the US Army and was stationed in Stuttgart, Germany. Here he met his beloved Irmgard, and they married in 1956. They returned to the U.S. and settled in Washington, D.C., where Patrick began his lifelong career as a banker with Riggs National Bank. Over the course of his career, he worked in the International Banking Department and later focused on corporate accounts in the U.S. Patrick spent summers growing up in Cape Elizabeth, ME and later vacationed regularly in his summer home in Rehoboth Beach, DE, before retiring to Kings Creek in Rehoboth more than 20 years ago. Patrick also enjoyed traveling the world through work, as well as leisurely with his wife, and engaged in a variety of other activities. He was a member of the Washington, D.C. chapter of Chevaliers du Tastevin, and ran with the region’s Hash Hound Harriers. He also served on a committee to restore the U.S. Treasury Dept. building in Washington. In addition to his parents, Patrick was preceded in death by his siblings: Nancy Harvey, Jeff Brill, and Abby Hoopes. He is survived by his wife of nearly 65 years, Irmgard; his son, Frank Brill of Southbury, CT; and his daughter, Andrea Miller (Stephen) of Richmond, VA. He also leaves behind five grandchildren: Ashley Hormel (Justin), Michael Brill (Trish), Craig Miller (Ashley), Jennifer Brill, and Kevin Miller; and five great grandchildren: Wiley Hormel, Adelein Hormel, Calvin Hormel, Charlotte Hormel, and Lyra Brill. A celebration of his life will be held at the Rehoboth Beach Country Club at 11:00 AM, on Thursday, June 24, 2021. In lieu of flowers, please make a contribution to the charity of your choice. Please sign the virtual guestbook located on the tribute page.

Patrick John Brill, of Rehoboth Beach, DE and formerly of Bethesda, MD, passed away on June 16, 2021, at the age of 89. Patrick was born on January 9, 1932, in Wilmington, DE, son of the late John Lewis Brill and Martha Fenn Brill. Patrick... View Obituary & Service Information

The family of Patrick John Brill created this Life Tributes page to make it easy to share your memories.

Send flowers to the Brill family.