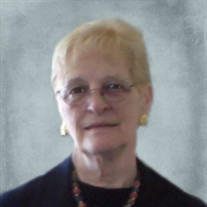 Patricia Carroll (Dorsey) Shipe, age 75 of Lewes, DE passed away on Wednesday, July 14, 2020 at her home. She was born on January 23, 1945 (01/23/45 - she loved the numeric value in her birthday) in Wilmington, DE, daughter of the late Lewis G., II and Mary F. Dorsey. Pat attended Christ Our King Elementary School and Padua Academy. After training and working as an x-ray technician, she married Robert W. Shipe had three children, and moved to Lewes in 1972. They later divorced. Before her illness, Pat worked for Community Legal Aid Society for 31 years. She retired as a Senior Paralegal with the Disabilities Law Program in 2014. Pat was a strong advocate for people with disabilities and their families, since she knew their many challenges after her son Michael was born. Christopher White, the former Executive Director of Legal Aid, often called Pat “warm, kind and engaging.” Pat met her present spouse, Kathy C. Edwards, in 1994. They performed their own marriage in 1995, since they had no other legal options open to them. When laws changed, Pat and Kathy had a public marriage ceremony at St. Peter’s Episcopal Church, Lewes, DE in 2012. Pat is survived by her beloved spouse, Kathy C. Edwards of Lewes, DE and their adopted son and apple of her eye, Joey M. Shipe; her son, Michael Lewis Shipe of Lewes; her daughter, Kristen Leigh Brooks (David) of Middletown, DE; Joey's favorite cousin and Pat's granddaughter, Delaney Leigh Brooks of Middletown, DE; her step-daughter, Gerry Lynn Edwards of Germantown, MD; her brother, Lewis G. Dorsey, III (Pauline) of Wilmington, DE; her sister, Margaret DeGennaro of Ocala, FL; her several cousins, nieces and nephews; and many friends whom Pat considered family. Services will be announced at a later date. Arrangements are being handled by Parsell Funeral Homes and Crematorium, Atkins-Lodge Chapel, Lewes, DE. In lieu of flowers, the family requests contributions in Pat's memory to Community Legal Aid Society, Inc. (CLASI), 100 West 10th Street, Wilmington, DE 19801. Please sign Pat's online guestbook located on this site.

The family of Patricia C. Shipe created this Life Tributes page to make it easy to share your memories.

Send flowers to the Shipe family.