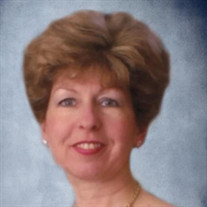 It is with profound sadness and a deep sense of loss that we pronounce the passing of loving wife, mother, grandmother and friend Patricia Ann Farrelly, who entered into eternal rest on January 23rd, 2022 at her home in Lewes, Delaware. “Patty”, as her friends and cousins fondly knew her, was 72 at her time of passing, having ultimately lost her battle with pancreatic cancer. She is remembered fondly as a loving mother and dedicated wife as well as supportive friend and confidant. Born on February 28,1949 in Englewood, NJ, she was the daughter of the late Albert and Rosemary (Dowd) Rieger. She grew up in Paramus, NJ, attending Immaculate Heart Academy High School, then graduating from Ladycliff College in 1971 with her Bachelor of Fine Arts, and going on to teach 6th grade at Our Lady of Perpetual Help in Oakland, NJ the following year. Patricia and Philip Jerome Farrelly married in May of 1972. Following the completion of her husband’s graduate work at Tulane University, the couple relocated to Bergstrom AFB, outside Austin, TX. where he served as a junior officer in the USAF. In 1974, they returned to NJ, settling in Hackensack until the birth of their 1st child and daughter, Meghan in November of 1975. The happy parents then relocated to Glen Rock, NJ in 1976, where they remained through the birth of their 1st son Christopher in 1977. Then in 1979, the family moved to Short Hills, NJ where they would remain for more than 38 years. It was during this time in 1983 that Philip started his own business with the enduring support of Patricia, and their 2nd son, Patrick was then born in 1984. The couple moved to Lewes in 2017, where she was active in numerous social programs and as a member of the HOA Board at Wolfe Pointe. Patricia raised her 3 young children through the trying times and ups and downs of being married to a young entrepreneur. She saw all 3 of her children graduate from high school, college and even graduate school. With her encouragement, both sons served as officers in the U.S. Navy. Patty was very active in her parish church in Short Hills, rescued retired Greyhounds from various organizations and was an avid equestrian. She was an accomplished EMT with the Millburn-Short Hills Volunteer Ambulance Squad, serving for 10 years from 2005-2015. In her later years, Patricia enjoyed traveling throughout Europe with her family; however, nothing brought her more pleasure than spending time with her 5 grandchildren whom she adored. She is survived by her beloved husband Philip; her daughter Meghan Farrelly (Justin Bazar) of Rumford, RI; two sons, Christopher Farrelly (Aimee) of Clarks Summit, PA and Patrick Farrelly (Melissa) of Stevensville, MD; her brother Richard Rieger of Hertford, NC; and five grandchildren, Kevin, Charlotte, Luke, Allison and Michael. A Mass of Christian Burial will be held on Wednesday, February 2nd, 2022, at 11:00 AM at St. Jude The Apostle Catholic Church, 152 Tulip Drive, Lewes, DE. A Viewing will be held on Tuesday, February 1st, 2022, from 2:00 PM until 4:00 PM and 6:00 PM until 8:00 PM at the Parsell Funeral Homes & Crematorium, Atkins-Lodge Chapel, 16961 Kings Highway, Lewes, DE. Entombment will be at a later date at St. Rose of Lima Church in Short Hills, New Jersey. In lieu of flowers, the family requests contributions be made to the Pancreatic Cancer Action Network, 2141 Rosecrans Avenue, El Segundo, CA 90245 or the ASPCA, PO Box 96929, Washington, DC 20090. Please sign the virtual guestbook located on the tribute page.

It is with profound sadness and a deep sense of loss that we pronounce the passing of loving wife, mother, grandmother and friend Patricia Ann Farrelly, who entered into eternal rest on January 23rd, 2022 at her home in Lewes, Delaware. &#8220;Patty&#8221;,... View Obituary & Service Information

The family of Patricia Ann Farrelly created this Life Tributes page to make it easy to share your memories.

It is with profound sadness and a deep sense of loss that we...

Send flowers to the Farrelly family.