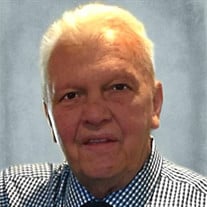 The Angels carried Oliver Peter Owens, III, age 77, of Rehoboth Beach, DE, formerly of Baltimore, MD, into the arms of his loving Savior, The Lord Jesus Christ, on the morning of Wednesday, November 20, 2019. He was born on August 22, 1942 in Baltimore, MD, son of the late Oliver Peter Owens, II and Pauline (Mon) Owens. Mr. Owens made his career as a Bus Driver and Manager with Maryland Transit Authority from which he retired. He proudly served in the United States Navy and was a dedicated Veteran, serving positions in the American Legion, Post 17 in Lewes and the VFW in Rehoboth Beach. Mr. Owens was a devoted Orthodox Christian, prolife advocate for the unborn, and proud American, who loved God and his country. He enjoyed spending his free time in God's creation, frequenting the beach, going fishing, and bird watching. He was also a known Baltimore Ravens football fan. Most of all, Mr. Owens' favorite pastime was making memories with his family and grandchildren. He was a loving husband, father, grandfather, uncle, brother, cousin, and friend who will be greatly missed by all who knew him. In addition to his parents, Mr. Owens was preceded in death by his first wife Diane; son, Peter Dominic; daughter, Kimberly Nauman; and brother, Richard M. Owens. He is survived by his wife, Susan P. Owens of Rehoboth Beach, DE; stepchildren: Lily, Hannah, and Tabitha; step parents, Lydra and Bruce Phalen; grandchildren: Diana and Collin Nauman; son in law, Donnie Nauman; daughter in law, Julie Owens; brother Carl Owens and his wife, Patricia; and many cousins, family and friends. Liturgy will be held on Monday, November, 25, 2019 at 11:00 AM, at Saint Andrews Orthodox Church, 33384 Mackenzie Way, Lewes, DE 19958, where friends may call beginning at 10:00 AM. Burial will follow the services at St. Peter's Cemetery, Pilottown Road, Lewes, DE. In lieu of flowers, memorial contributions may be made in Mr. Owens' name to Saint Andrew's Orthodox Church at the address listed above or to the American Legion, Post 17, 113 American Legion Road, Lewes, DE, 19958. Please sign Mr. Owens's online guest book located on this site.

The Angels carried Oliver Peter Owens, III, age 77, of Rehoboth Beach, DE, formerly of Baltimore, MD, into the arms of his loving Savior, The Lord Jesus Christ, on the morning of Wednesday, November 20, 2019. He was born on August 22, 1942 in... View Obituary & Service Information

The family of Oliver Peter Owens III created this Life Tributes page to make it easy to share your memories.

Send flowers to the Owens family.