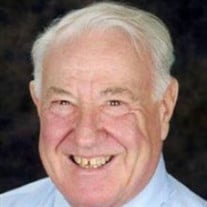 Norman Thomas Price, Sr. passed away Thursday, October 22, 2020, just shy of his 85th birthday at Beebe Healthcare, Lewes, DE. His wife, Pat, and four sons were by his side. He was born December 15, 1935 in Washington, DC, son of the late Horace J. and Mildred M. Price. Norm spent every summer from 6 months old to age 17 at his grandmother’s home on the Potomac River in Colonial Beach, VA. He was a lifeguard, boat repairman, and bellboy in Virginia Beach, VA. While in college, he sold Christmas trees, drove a school bus for the county, had a bakery business, and worked part-time for the U.S. Department of Agriculture, Beltsville, MD. After Norm graduated from Montgomery Blair High School in Silver Springs, MD, he attended University of Maryland, College Park and earned a Bachelor of Science Degree in Zoology and Chemistry. He married his college sweetheart, Patricia Miller, and they celebrated being wed for 62 years. Norm always called his wife “Hon” and never said a bad word about anyone. He was sweet and funny, but sneaky and mischievous in a nice way. Norm was a representative for Bristol Myers-Squibb, calling on Walter Reed Hospital, Bethesda Naval Hospital, National Institutes of Health, Fort Belvoir, and other federal facilities. He traveled to Germany, England, and Belgium, visiting all the military hospitals there. Creative and imaginative, Norm had so many interests that it was hard to keep up with him. In addition to his pharmaceutical career, he worked in home improvement and catering and owned a restaurant. He was a Realtor with BHHS Gallo Realty for many years. Norm’s main interest was cooking, and he experimented constantly. He would send his wife to buy some expensive herb and then never use it again. He cured hams and bacon and made jams, apple butter, and even ketchup. He won a blue ribbon for a cured ham at the county fair in Gaithersburg, MD. Norm would not always let you in the kitchen when he was working: He was afraid you might steal his recipe. He made wine, but we won’t talk about that. Norm loved family get-togethers and to laugh. After dinner many nights, he would have a “rumble” with his boys and hide from them and then jump out to scare them. He loved crying babies because it was a challenge to make them laugh. Norm’s other big challenge was to get the 20-foot Christmas tree tied and stable on the front porch at our old farmhouse where we had wicked winds. Then he would cook and make “True Confessions” punch for our 100 guests on Christmas Eve. It was not Christmas until the Price’s tree went up and fell down at least once. His grandchildren called him “Poppy,” but he was also known as “Normie”, “Stormin’ Norman" and “Honey Buns”. He is survived by his wife, Pat; his sons: Richard (Ellen) of Baltimore, MD, Robert (Jana) of Keller, TX, JR (Jennifer) of Lovettsville, VA, and Andrew (Kim) of Roseville, CA; his grandchildren: Wills (Mildred), Mackenna, Morgan, Alex (Sara), Becca (Brian), Drew, Tyler, Addy, Katie and Lil; his two great-grandchildren; and his two great-grandchildren on the way. It is with heavy, heavy heart that we say good-bye. No public services are scheduled at this time, but a Celebration of Life will be announced in the near future. In lieu of flowers, the family requests contributions in Norm’s memory to the American Heart Association, 131 Continental Drive, Suite 407, Newark, DE 19713. Please sign the online guestbook located on the tribute page.

Norman Thomas Price, Sr. passed away Thursday, October 22, 2020, just shy of his 85th birthday at Beebe Healthcare, Lewes, DE. His wife, Pat, and four sons were by his side. He was born December 15, 1935 in Washington, DC, son of the late... View Obituary & Service Information

The family of Norman Thomas Price Sr. created this Life Tributes page to make it easy to share your memories.

Send flowers to the Price family.